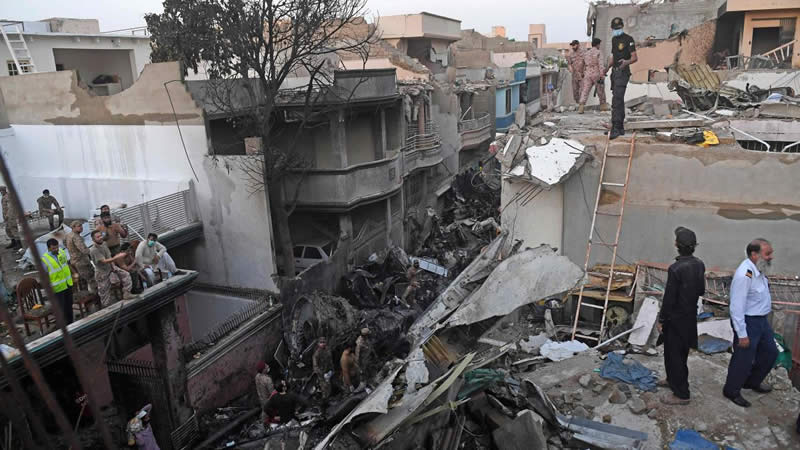 The federal government on Saturday announced compensation for the families of those who were aboard the ill-fated Pakistan International Airlines (PIA) flight that crashed into a residential area near Karachi’s Jinnah International Airport a day ago, killing 97 of 99 people onboard.
Speaking to reporters, Federal Aviation Minister Ghulam Sarwar Khan said that families of those who were killed would receive Rs1 million each while the two survivors would be given Rs500,000 each.

Khan also announced that the government would offer compensation to the residents of the area whose houses and cars have been affected. “A lot of damage has been done. We have directed that an initial survey be carried out and the government will pay for the damages after the assessment has been done,” he said.

The minister said that the government’s first priority was to hand over the bodies of the victims to their families after identification. He paid tribute to the “spirit of the people of Karachi”, who he said had participated keenly in the rescue work.

He also paid tribute to the pilot, saying that video footage showed he had “tried his best to reach the runway but when he saw it was impossible, he diverted the craft to an area where there would be minimum damage”.

Khan announced the Airbus company would conduct a counter-inquiry into the cause of the crash. He also assured the people that the government’s inquiry would be “fair” and added that full efforts would be made to present the report to the nation and the parliament “as soon as possible”.
“Four experienced members of the Pakistan Air Force are part of the committee. They will make full efforts to present the facts.”

The minister said the government would take “100 per cent” responsibility for any negligence that led to the crash. “Whoever is responsible, they will be made to resign.”

Responding to a query, he added: “If the report says the PIA CEO showed negligence, he will resign. If it says we have shown negligence, then not only will we resign but also present ourselves for accountability.”

Earlier, the federal government on Friday had constituted an investigation team to probe the crash.

The investigation team would be headed by Aircraft Accident and Investigation Board (AAIB) President Air Commodore Muhammad Usman Ghani and will feature experts/members from/of the civil and well as the military aviation sector.

WHO Suspends Hydroxychloroquine Trials for COVID-19

WHO Suspends Hydroxychloroquine Trials for COVID-19