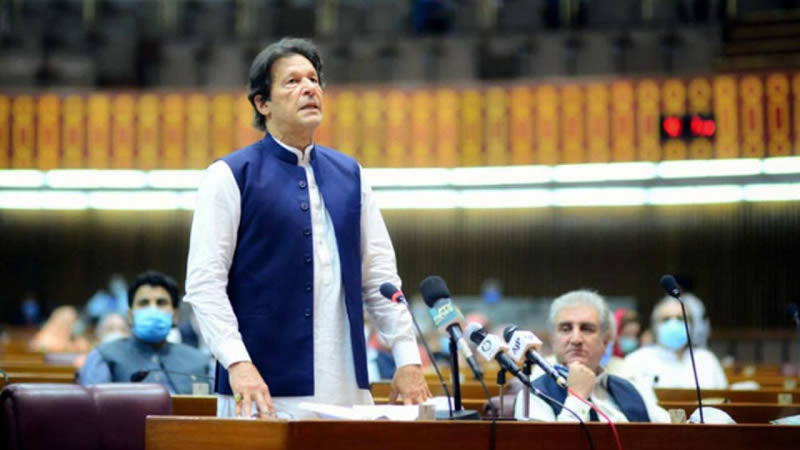 Prime Minister Imran Khan on Thursday came down hard on opposition parties, saying said that Pakistan was at the verge of bankruptcy when he came to power.

Addressing the National Assembly session, the prime minister, while reacting to the criticism by opposition parties that the prime minister and his government was ‘confused’ on how to react to the pandemic, he issued a challenge to the detractors. “I want to challenge you to point out a single contradiction in my statements since we imposed the lockdown on March 13,” he said. “Ever since the pandemic broke out in Pakistan, my government faced a lot of criticism for not imposing a complete lockdown across the country,” he said, adding that the provincial governments criticised him and said that a stricter lockdown should have been imposed.

“We bore a lot of criticism in the beginning to impose a stricter lockdown. There was a lot of pressure on me. From my own people. From my own cabinet to impose something like India,” said the prime minister. “It is being said again and again that there was confusion [in our coronavirus response]. Mr Speaker, if there was any government in the world that wasn’t confused, it was ours. Since day one,” he added.

The prime minister said people give the example of countries like New Zealand when talking about social distancing ‘but New Zealand has social distancing already’ with a low population density. On the other hand, Pakistan has a high population density and eight-nine people often live in one-room houses, he said. “I said from day one we had a dual problem; we had to save the people from corona and hunger, and those dying from poverty,” he added, acknowledging that his government had to face “a lot of criticism” at the start and there was pressure, including from cabinet members, to implement a stricter lockdown ‘as done by India’. But he said the data now coming in had shown that the government took the right steps to respond to the health crisis.

The prime minister said the lockdown has negative repercussions for the economy in Pakistan, while strict lockdown imposed by India, had an adverse effect on its economy. He pointed out that rate of coronavirus infections is still higher in India as compared to Pakistan and people in cities like Mumbai, were forced to wait outside hospitals to get treatment against coronavirus. He said in India, 34 percent of the population has gone below the poverty line in the wake of lockdown. Millions of people are out on the roads to find work and to make ends meet when measures for a lockdown were taken, he added.

He said due to coronavirus, the world is in recession and countries suffered losses of $12 trillion; many industries have been closed down permanently; services sector particularly tourism and airline industry suffered immense losses and the world still does not know how long the economic crisis will continue. He said the Pakistan Tehreek-i-Insaf government inherited record level of current account deficit as previously exports were stagnant at $ 20 billion while imports going upto $60 billion. The high current account deficit showed that the country’s economy was sick, he noted.

Pakistan Rejects US Report on Terrorism, dubs it ‘Self-Contradictory, Selective’