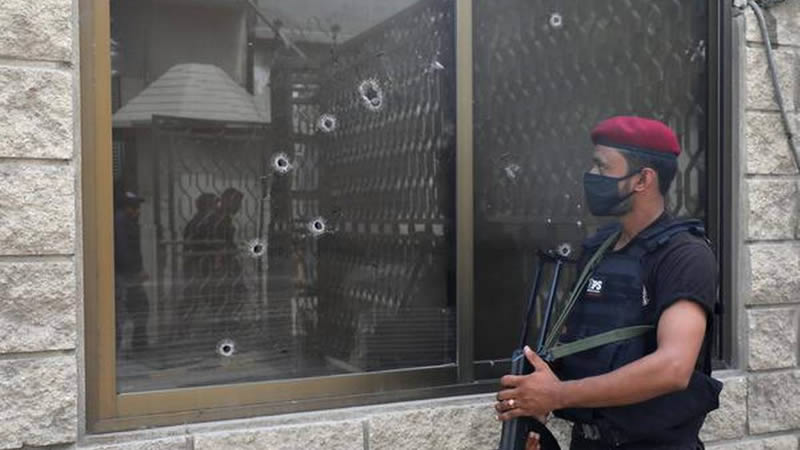 A senior aide of the prime minister on national security hinted at the involvement of India in the terrorist attack on the Pakistan Stock Exchange (PSX) in Karachi on Monday, in a move that may further deepen the already tense ties between the two nuclear-armed neighbours.

“Pakistan’s enemy is naked in its aggression. Make no mistake, today’s attack in Karachi is state-sponsored terrorism against Pakistan. Our valiant countrymen and women have fought against this menace before and our resolve remains resolute,” Moeed Yusuf, PM’s special assistant on national security tweeted hours after security forces gunned down four terrorists in the port city.

Moeed apparently linked the attack with the current border tensions between China and India. The two countries have locked horns in the high altitude Ladakh region since early May. At least 20 Indian soldiers including a colonel was killed when the weeks-long border tensions turned into a bloody fight at the Galwan valley.

Indian Prime Minister Narendra Modi has been under pressure domestically for capitulating before China.

“The world must wake up to suicidal tendencies of this destabilising factor that is finding distractions to overcome its own failures and embarrassment. Our warnings have come true repeatedly. Whether on demographic re-engineering in Kashmir or sponsored terrorism against Pakistan,” Moeed said in another tweet highlighting Indian frustration over its recent failures in the border tussle with China and in Occupied Jammu and Kashmir.

Earlier, the banned Balochistan Liberation Army (BLA) took the responsibility of the terrorist attack. BLA was not only declared as terrorist outfit by Pakistan but also several other countries including the United States and the United Kingdom.

This was the second attack claimed by BLA in Karachi in recent times. In November 2018, BLA terrorists tried to storm the Chinese Consulate in Karachi but they were pinned down before they could enter the premises.

Pakistan does not see BLA just as a local terrorist outfit but a proxy of hostile foreign agencies, which according to Islamabad, are not in favour of China, Pakistan Economic Corridor (CPEC).

India and the US have publicly opposed the CPEC, the flagship program of President Xi Jinping’s Belt and Road Initiative (BRI).

One of the reasons, experts say, tensions have been building up between China and India is because of New Delhi’s opposition to CPEC. India claims the CPEC passes through its territory, a claim strongly rejected by Pakistan.

Observers believe that China’s military standoff with India may be aimed at conveying a message to New Delhi that Beijing will never accept any hurdles in the way of CPEC.

With Pakistan officially publically pointing fingers at India for the latest attack, tensions are likely to further soar between the two countries.

Pakistan has repeatedly warned that India could carry out “false flag” operation to divert attention from Kashmir as well as its current tensions with China.

Worst of COVID-19 Pandemic ‘yet to come’, warns WHO

Worst of COVID-19 Pandemic ‘yet to come’, warns WHO