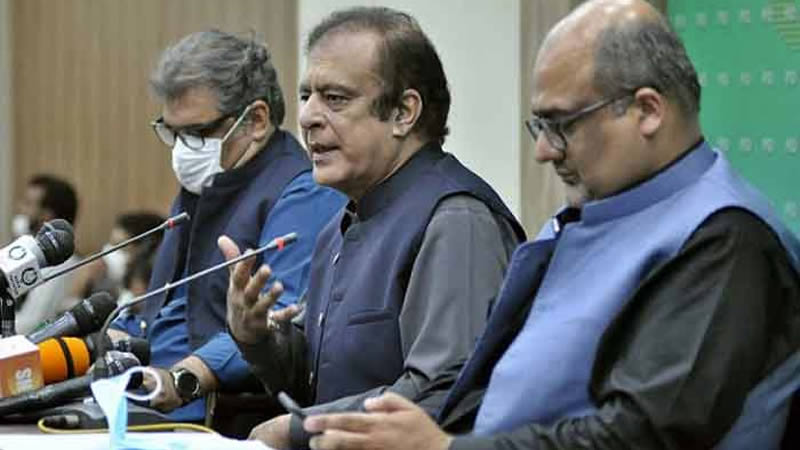 The spokespersons of the ruling party on Sunday observed that the purpose of the opposition’s all parties conference (APC) was to seek a national reconciliation ordinance (NRO) from the government to get away with their illegal wealth but the PTI would never grant them any concession or strike a deal with them.

The PTI leaders further observed that the address of PML-N supremo Nawaz Sharif during the APC carried nothing new but was a repetition of his old mantra.

Speaking to a private news channel, Federal Minister for Information and Broadcasting Senator Shibli Faraz noted that Sharif had made similar speeches during the general election 2018 campaign.

He stated that the former premier should be asked over his narrative against the national institutions and demanded of the authorities to take notice of his remarks.

Sharif in his address had said that the opposition’s struggle was not against Prime Minister Imran Khan but those who had brought him to power through the 2018 elections.

“It should be probed as to whose narrative he is following and working,” he said.

Referring to his remarks that the 2018 polls were managed, Faraz maintained that before making such statements, the PML-N chief should remember that he had remained premier of the country thrice while Imran Khan had been elected prime minister for the first time.

“All was fine for them [PML-N and PPP] during their tenures but democracy was suddenly endangered when they assumed a role in the opposition,” he said.

Faraz observed that Sharif looked healthy during his virtual address in the APC and added that he mocked the judicial system after the court allowed him to go abroad for treatment.

“Instead of asking money trail of others, Nawaz should appear before courts,” the information minister said and demanded of the former premier to return to Pakistan if he wanted to serve the country.

The government spokesperson clarified that PM Imran had provided his 40 years old money trail and the court had declared him honest and righteous.

Reacting to the all parties’ conference (APC), Minister for Science and Technology, Chaudhry Fawad Hussain remarked that the opposition parties were powerless and incapable to launch any move against the government.

Expressing his views on a private TV channel, the minister said the nation had seen the “healthy face” of Nawaz Sharif through the media.

He recalled that the former premier had been granted bail on medical grounds but now his reality was badly exposed.

The leader of the PML-N was expressing sorrow over the non-cooperation of an institution during his speech, he said.

Fawad claimed that the opposition parties had been making “hue and cry” on media for availing the national reconciliation ordinance (NRO) to get rid of their corruption cases.

He reiterated that the current leadership of the PTI would never grant a concession or compromise with the elements who had looted the national wealth.

Responding to a question, he said the opposition would never side with the JUI-F stance to topple the government.

Commenting on the APC, Special Assistant to the Prime Minister (SAPM) on Accountability Shehzad Akbar said that the forum was nothing but a gathering of “criminals and convicts” to make deliberations on how to paralyse the law enforcing agencies and to divert the attention from their corruption cases.

Speaking to a private news channel, Akbar reminded that he had already predicted about the agenda and motives of the APC in his previous press conference that the meeting would aim to change and redefine the narratives against them.

“If airing the video link speech of the PML-N leader [Nawaz Sharif] is a manifestation of media freedom in the country then addressing the APC by a convict and proclaimed offender is also a clear violation of laid down rules and code of conduct,” he said.

The SAPM advised Sharif to trust the national institutions and return to country to face the cases against him.

He noted that the opposition had a long history of blackmailing from the federal budget to legislation on FATF-related anti-money laundering law and that all their attempts were successfully thwarted.

He reminded that the APC was being held for the fifth time in a span of two years.

Addressing a press conference at the PID in Islamabad, Gill observed there was a loud and clear message for the opposition parties that the accountability process would continue no matter how many APCs are held.

The SAPM stressed that the government’s job was to carryout accountability while the rest was the job of the courts.

“Holding of APCs frequently shows the opposition’s thirst for money laundering, which is still not satiating,” he said.

“Those going to attend the APC are big thieves, and, unfortunately, the event is a gathering of such elite who never let the poor segments of society rise,” he added.

He pointed out that the PML-N and PPP had been involved in mudslinging against each other but today both the parties had joined hands for their vested interests.

“The entire Sharif family who used to consider itself as the king of Punjab is present today as courtiers before Bilawal Bhutto Zardari,” he said.

“The main purpose behind the APC is to get an NRO through which they [opposition parties] can get away with their illegal wealth,” he added.

Expressing his views on the APC, Minister for Railways Sheikh Rashid Ahmed maintained all the “criminals and convicts” had gathered on one platform to withdraw their corruption cases and halt the process of accountability process against them.

“Life imprisonment or confinement is written in the destiny of these opposition leaders and they cannot get [an] NRO from honest and righteous Prime Minister Imran Khan,” he said, while talking to a private news channel.

“Nawaz Sharif talks about sanctity of vote but he [Nawaz] should respect the court decisions to face the corruption cases against him in Pakistan,” he added.