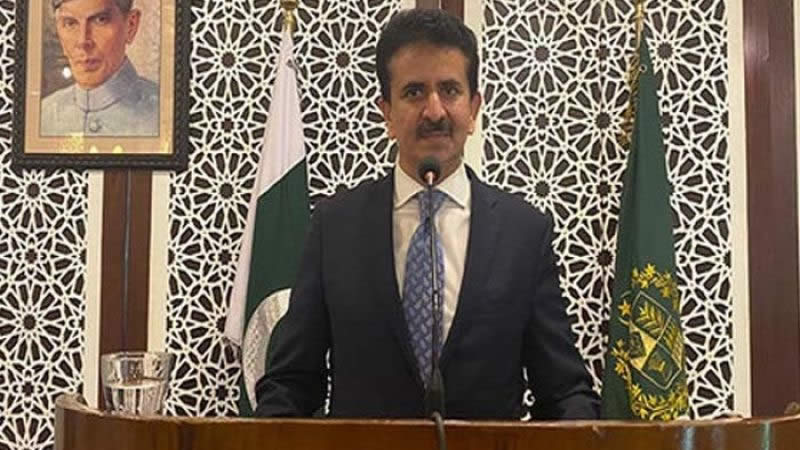 Foreign Office spokesman Zahid Hafeez Chaudhri has said the Pakistani diaspora in France is law abiding and positively contributing to the French economy and there are no complaints from them of difficulties in the aftermath of the recent developments.

In a statement issued here on Sunday, the FO spokesman said the Indian media outlets were spreading “fake news” regarding the Pakistani community in France, following recent incidents, including the display of blasphemous caricatures of the Holy Prophet (PBUH), beheading of a school teacher in Paris and murder of three people in a Nice church.

“We’ve noticed some fake news with regard to the Pakistani diaspora in France being spread by some sections of Indian media and dummy Twitter accounts,” Mr Chaudhri said.

“The baseless and misleading information is patently a handiwork of Indian anti-Pakistan propaganda machine working overtime,” he said.

The spokesman was referring to tweets by a Twitter account pretending to be run by the Pakistan Embassy in France, which claimed that the French authorities were deporting Pakistani citizens after Prime Minister Imran Khan denounced French President Emanuel Macron for encouraging Islamophobia.

The FO spokesman also categorically rejected a statement of the Indian Ministry of External Affairs regarding Gilgit-Baltistan and termed it “irresponsible and unwarranted”.

“India has no locus standi whatsoever on the issue — legal, moral or historical,” he said.

“For more than 73 years, India has been in illegal and forcible occupation of parts of Jammu and Kashmir. Regurgitation of false and fabricated claims by India can neither change the facts nor divert attention from India’s illegal actions and continuing humanitarian crisis resulting from perpetration of the worst human rights violations in Indian Illegally Occupied Jammu and Kashmir,” he said.

Mr Chaudhri said Pakistan’s position on the Jammu and Kashmir dispute remained firmly anchored in the relevant United Nations Security Council resolutions. The final resolution of the Jammu and Kashmir dispute is only possible through the exercise of the Kashmiris’ right to self-determination by holding a free and impartial plebiscite under the auspices of the United Nations.

“Pakistan calls upon India to immediately end its illegal and forcible occupation of parts of Jammu and Kashmir and comply with its international obligations by allowing the Kashmiris to exercise their inalienable right to self-determination through a free and impartial plebiscite under the auspices of the UN as enshrined in the relevant UNSC resolutions,” he concluded.

The FO spokesman had issued the statement in response to a statement by his Indian counterpart Anurag Srivastava who had “rejected” the announcement made by Prime Minister Imran Khan about grant of provisional status of a province to Gilgit-Baltistan.

“The government of India firmly rejects the attempt by Pakistan to bring material changes to a part of Indian territory, under its illegal and forcible occupation,” Mr Srivastava said.

He said: “Such attempts by Pakistan, intended to camouflage its illegal occupation, cannot hide the grave human rights violations, exploitation and denial of freedom for over seven decades to the people residing in these Pakistan occupied territories.

“Instead of seeking to alter the status of these Indian territories, we call upon Pakistan to immediately vacate all areas under its illegal occupation.”

We Gave India a Bloody Nose and its Still Hurting: DG ISPR