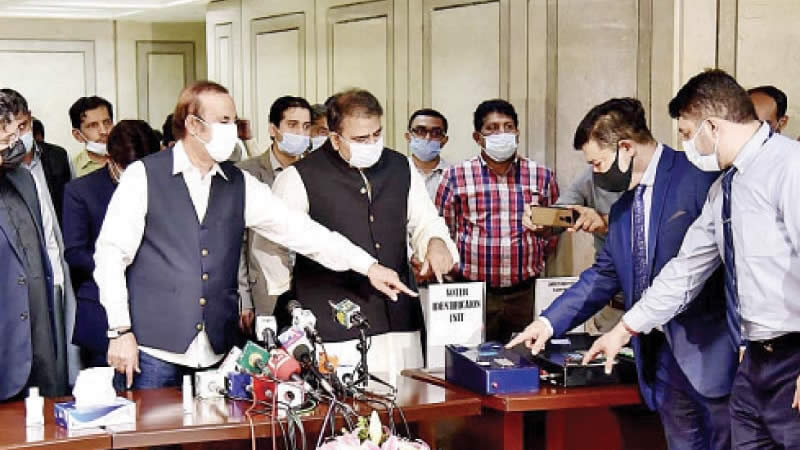 Fawad invites the opposition parties to observe working of the machine, and suggest any improvements

A preliminary model of an electronic voting machine (EVM) was shown by the government at the Parliament House on Wednesday.

The prototype machine was presented by the Minister for Information and Broadcasting Fawad Chaudhry, Adviser to Prime Minister for Parliamentary Affairs Dr Babar Awan and Chairman Senate Standing Committee on Information Faisal Javed.

While briefing the media, the information minister said that the new voting machine fulfils the thirty-six conditions of the Election Commission of Pakistan (ECP).

He said the EVM will produce quick election results, and the contesting candidates will have no reason to level allegations of rigging.

Fawad invited the opposition parties, including the Pakistan Peoples Party (PPP) and the Pakistan Muslim League-Nawaz (PML-N), to observe the working of the machine placed at the Parliament House, and suggest any improvements.

He said EVMs are being used in twenty countries of the world, adding that the one presented at the Parliament House will also be showcased before members of bar associations to seek their input.

Speaking on the occasion, Dr Babar Awan maintained that the EVM will provide a remedy to the ‘cancer of rigging allegations’ in elections in the country.

Out of the five proposed EVM models, three have been imported and two others are being manufactured in Pakistan, said the adviser to the prime minister. He adding that the election commission will finalise the model of the machine.

Awan said under the directions of the premier, the ECP has been empowered to use EVMs in elections and give the right of vote to overseas Pakistanis.

The use of the machine was also demonstrated before the representatives of the Parliamentary Reporters Association on the occasion.