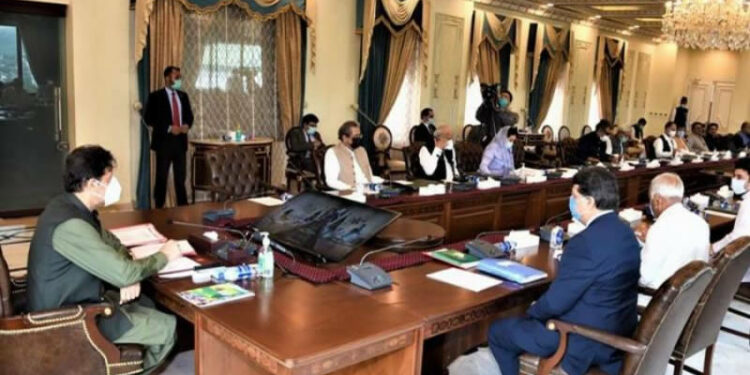 The federal cabinet on Tuesday approved the State Bank of Pakistan (SBP) amendment bill to give absolute autonomy to the central bank in a bid to qualify for the $1 billion loans but deferred the approval of the Rs360 billion mini-budget for the second time in a week.

The bill has been approved to bring amendments to the SBP Act of 1956 under one of the conditions of the International Monetary Fund (IMF) and on the desire of the SBP governor.

Many of the clauses that the federal government had earlier termed “unconstitutional” are still part of the revised bill after the IMF refused to budge from its position.

However, the government again deferred the approval of the highly inflationary Rs360 billion mini-budget amid strong criticism against the Ministry of Finance due to increasing inflation.

Some cabinet members from Khyber-Pakhtunkhwa objected to bringing the mini-budget after the Pakistan Tehreek-e-Insaf faced defeat in the local bodies’ elections.

“As per law, once the cabinet approves the budget, it has to be transmitted to the National Assembly without delay. Since there was no NA session, it was deferred,” Fawad Chaudhry told The Express Tribune when asked about the reason behind deferring the mini-budget.

It was the second time in the past one week that the federal cabinet did not approve the mini-budget.

The information minister said that the mini-budget would be approved within this week by calling a special cabinet meeting. However, sources said the ruling party was facing two major challenges – how to justify unleashing the second round of inflation by imposing a 17% sales tax on 144 items – ranging from contraceptives to children’s milk, red chilies, and salt. The other items include all dairy products, imported vegetables, and food items sold at bakeries.

The second issue that the government is facing is convincing the National Assembly members from the PTI and allies to vote for the highly inflationary budget.

Sources said the government may still try to convene a special cabinet meeting on Thursday to approve the budget and then present it in the National Assembly the same day.

Despite concerns expressed by many quarters, independent economists, and media, the federal cabinet on Tuesday finally approved the revised draft of the SBP amendment bill.

The IMF wanted to amend the SBP bill to give more autonomy to the central bank. The draft of the SBP bill showed that the federal government remained unsuccessful in convincing the IMF to explicitly set inflation targets and ensure accountability of the central bank governor for missing the goal.

The government has introduced the price stability definition, which is, “the maintenance of low and stable inflation guided by the government’s medium-term inflation target”. However, the words “low, stable, and target” have not been defined anywhere in the revised bill.

The federal government also failed to convince the IMF to let it borrow from the central bank despite earlier terming the proposed clause of banning the borrowing as “unconstitutional”.

The central bank shall not extend any direct credit to or guarantee any obligations of the government, or any government-owned entity, or any other public entity, according to a clause of the revised draft, which is similar to the one the cabinet approved in March this year.

This is a major source of concern for many people, as the country has been left at the mercy of commercial banks. There has already been a complete ban on government borrowing from the SBP since July 2019 and yet there is double-digit growth in currency in circulation and inflation has also remained out of control.

The government has again introduced a clause to retire the overdraft by the Pakistan Railways. According to the bill, the railway’s overdraft will be converted into long-term debt of eight-year duration.

The government could not ensure accountability of the central bank and in the name of accountability, “the governor shall submit an annual report before parliament regarding the achievement of the bank’s objectives, the conduct of monetary policy, state of the economy, and the financial system”, according to the bill. Some ground has been retrieved in the case of the removal of the SBP governor.

As against the earlier proposal that the governor could only be removed on misconduct if it was proven in a court of law, now the federal government “may remove” the governor, or a deputy governor, if he is guilty of gross misconduct; or is incapable of properly performing the duties of his office by reason of physical or mental incapacity.

The governor will be appointed for a period of five years and his term can be extended for another five years.

The finance minister’s powers to appoint a deputy governor have been further curtailed when compared with the March 2021 bill.

Now, “early consultation” between the finance minister and the SBP governor will not be required and the federal government will appoint a deputy governor from a panel of three recommended by the governor, in order of merit.

The Finance Division secretary has been proposed to be retained on the board but “without the right to vote”.

The government was also unable to convince the IMF to separate the positions of the SBP governor and the chairperson of the board. It further remained unsuccessful to persuade the IMF to allow it to retain the Monetary and Fiscal Policies Coordination Board, which has now proposed to be abolished.

The clauses related to functional and institutional autonomy proposed in March have also largely remained unchanged. The government will also consult the SBP prior to the introduction of any bill by the federal government in parliament which may have a bearing on the functions of the bank.

The government has withdrawn the proposed immunity from NAB and FIA laws to the governors, deputy governors, board directors, including sitting ones and those who have already retired or completed their terms of the offices.

The governor will have to appoint his successor during his foreign visits in writing.