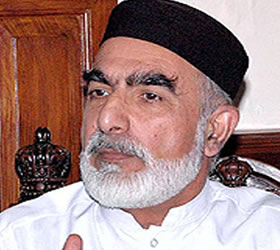 PESHAWAR (September 29 2010): The Khyber-Pakhtunkhwa Governor, Owais Ahmed Ghani has said that provision of economic development and employment opportunities to people through restoration of normal economic activities in the province is the biggest challenge of present time, wherein local entrepreneurs and traders have to play a vital role with utmost courage and patience.

Addressing as the chief guest at the 7th Gold Medal and Export Trophy Awards Ceremony held under the auspices of Khyber-Pakhtunkhwa Chamber of Commerce & Industry at a local hotel, the governor said this, no doubt, is a very difficult challenge, yet it has to be surmounted by trading community itself.He assured government’s support while formulating future economic development policies in this respect. Ghani said though we in this province are faced with tremendous challenges for the last almost 30 years yet, last few years have remained the most challenging ones.

Each and every citizen, irrespective of his position and status has suffered on equal basis because of this challenging situation, and it is because of their unmatchable sacrifices that the people of the province have established themselves as the role model, he added.

Pointing towards the audience, the Governor said promotion of labour intensive industries coupled with exploitation and development of mineral resources are the best ways to achieve the desired goal of speedy revival of economic activities. He appealed to the investors to come forward with highest spirit of courage and take it a mission on war footings. “Personnel of our security forces are still embracing martyrdom in sporadic incidents of terrorism and extremism and let me assure the business community that we, InshaAllah would also overcome them with the spirit of self restraint and courage”, he remarked.

Referring to various points raised by Riaz Arshad, President of the Chamber, Muhammad Ishaq, Chairman, Awards Committee, and Ghazanfar Bilour who read out a message of his ailing father and leader of Businessman Forum, Senator Ilyas Bilour on this occasion, the governor assured that efforts are underway not only to resolve the grievances and apprehensions of the trading community of the province, but also to open new opportunities of rapid economic development.

In this connection, he particularly mentioned steps under way for opening up of new land routs to promote trade with Afghanistan and Central Asian States. Pakistani nation, the Governor said is imbibed with the highest degree of unique spirit which helps it to confront challenges and overcome them and there exits no doubt that it would also return with complete success, as far as revival and development of economy is concerned.

Earlier, Riaz Arshad President of the chamber and Mr Muhammad Ishaque, Chairman, Awards Committee while welcoming the Governor and the guests highlighted the achievements of the chamber and the importance of the Awards ceremony. The members of the chamber, they said, have made remarkable achievements despite highly critical and difficult situation because of terrorist and extremist incidents and they are leaving no effort to come upto the expectations.

While referring to role of chamber in flood relief activities, they said that they are actively engaged in materialising “Apna Ghar Banao Scheme” and survey of 700 houses has already been completed. In all more than thirty different categories of trade and banking, the top most organisations were given gold and silver medals and trophies. The Lucky Cement Factory bagged top position by clinching four gold medals for being the top most sales tax payer; income tax payer; exporter and importer and on its behalf Seth Taba received honours while in banking sector, Bank of Khyber got the honour of the best bank of the province which got seven gold medals followed by Bank Al-Falah and Muslim Commercial Bank that received four gold medals each in various banking services related categories.