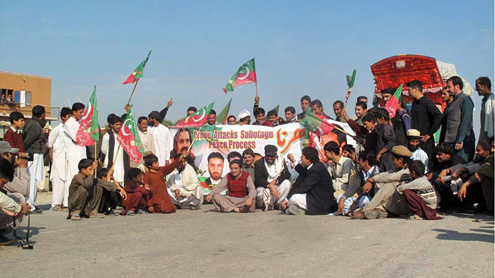 Around 100 workers from the former cricket star’s Pakistan Tehrik-i-Insaaf (PTI) party set up checkpoints in the northwestern city of Peshawar on a main road leading to Afghanistan. They stopped trucks and hauled drivers from their cabs to check their paperwork, following a call by Khan at a rally on Saturday to block supplies to Nato forces in Afghanistan in protest at the drone attacks.

The activists, carrying the PTI’s green and red flag, broke open truck containers to check their contents, an AFP reporter at the scene said. The PTI heads the government in Khyber Pakhtunkhwa province, of which Peshawar is the capital. But authority for the highways lies with the federal government, which has so far made no move to block Nato supplies. Muhammad Faisal, a senior police official, said the PTI activists’ actions were illegal but he was powerless to act. “The protesters are doing unlawful acts by checking documents and screening goods, they don’t have authority,” he told AFP.

“But we can’t take action against them because we have no instructions from the government. If the government orders us, we will stop this illegal activity.” PTI activist Asghar Khalil told AFP they were heeding their leader’s call to action and would not stop until Washington promised to end drone strikes. Khan has long opposed the US campaign of drone attacks targeting Taliban and Al-Qaeda militants in Pakistan’s tribal areas. He has intensified his rhetoric since a US drone strike killed Pakistani Taliban chief Hakimullah Mehsud on November 1. Khan says that attack was a deliberate attempt by Washington to sabotage efforts towards peace talks with the militants, who have killed thousands in a six-year campaign of violence.

“They are doing unlawful acts. They broke the sealing of my container and forcibly examined the goods,” Faiz Muhammad Khan, a truck driver transporting sanitary items to Afghanistan, told AFP. “If they want to block supplies for Nato forces, they should stop it in Karachi or at the border.” Later in the day, one of Khan’s allies, the right wing Jamaat-i-Islami party, led thousands in a protest against drone attacks and the Nato supply line in the southern port city of Karachi, where the shipments originate. Pakistan is a key transit route for the US-led mission in landlocked Afghanistan, particularly as Nato forces prepare to withdraw by the end of next year.

Nato supplies were suspended on Saturday because of a major PTI rally, which was held on the route used by the trucks. The drone strikes are deeply unpopular in Pakistan. Islamabad publicly condemns them as counter-productive and a violation of sovereignty, although previous governments have given their tacit support to them. -Dawn