by Top
in Featured, Khyber Pakhtunkhwa
0 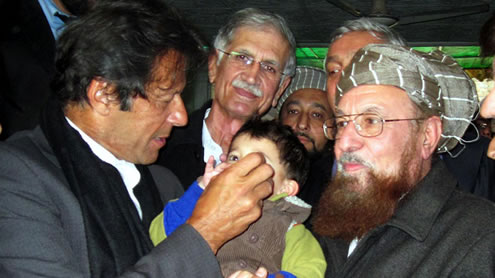 PESHAWAR: Avoiding an open condemnation of Taliban militants yet again, Pakistani cricketer-turned-politician Imran Khan on Wednesday assailed “those who are attacking polio workers” and demanded an immediate end to the attacks.

Without naming Pakistani Taliban, Khan said those who are targeting polio workers, “are doing injustice to our province, our country and the whole of humanity.” He has pledged personally to spearhead polio vaccination efforts in the troubled northwest of the country, which remains a hotspot for the crippling disease. Khan kick started the campaign by administering polio drops to children in a government hospital in the town of Akoda Khattak, 50 km (30 miles) east of Peshawar.

“If we run a full-fledged campaign against polio in the coming three months we can eradicate polio from the country and I will personally lead this campaign,” he said. Imran Khan’s Pakistan Tehrik-i-Insaf (PTI) party leads the government in the northwestern province of Khyber Pakhtunkhwa (KP), which borders North Waziristan.

The PTI chief appeared alongside radical cleric Maulana Samiul Haq, known as the “Father of the Taliban,” who last week issued a fatwa urging parents to immunise their children against polio, saying vaccinations complied with Islamic law. Doctor Imtiaz Khan, focal person for the polio campaign in the province, told AFP that up to 2.3 million children in nine districts would be targeted in the immunisation drive.

“As many as 52 cases of polio were reported from the tribal areas and 10 from Khyber-Pakhtunkhwa this year,” he said. Pakistan is one of only three countries in the world where polio remains endemic, and efforts to stamp it out have been hit by opposition from Islamist militants and attacks on vaccination teams. Earlier on Tuesday, police foiled an attempted attack on a polio team in Karachi. A Taliban ban on inoculation in the tribal region of North Waziristan last year has been blamed for a surge in cases.

According to the Global Polio Eradication Initiative led by the World Health Organisation (WHO), Pakistan has recorded 74 cases of polio this year – up from 58 in the whole of 2012. Imran Khan warned that people might not be allowed to travel out of the province in the near future unless the polio virus was eradicated.

Last month the WHO linked an outbreak of polio in Syria that has paralysed 13 children to a strain of the virus from Pakistan. Earlier this month, New Delhi announced it would require citizens from Pakistan and other polio-affected nations travelling to India to undergo polio vaccination at least six weeks before departure.

In a late night development, a spokesman for Pakistan Tehreek-i-Insaf (PTI) stated that the life of party chairman Imran Khan was seriously under threat from a militant group over his stance on the polio campaign. “PTI chairman Imran Khan has been informed that according to information from Waziristan there has been a serious threat to his life by (a militant group) Ansarul Mujahideen because of his polio announcement,” the spokesman said in a text message sent to Dawn.

Inaugurating a polio campaign by administering drops to children in a government hospital in the town of Akorra Khattak in Khyber Pakhtunkhwa, Mr Khan, without naming Taliban or any other militant group, had stated that those who were attacking polio workers “are doing injustice to our province, our country and the whole of humanity”.

The PTI spokesman said the party would raise the issue on Thursday either in the National Assembly or through a news conference. – Dawn