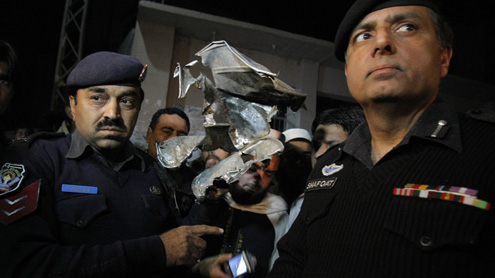 PESHAWAR: At least ten people were killed and more than 60 injured Thursday evening when a bomb exploded at a religious centre in Peshawar, the capital of Khyber Pakhtunkhwa province.

Eyewitnesses said the bomb exploded at Tablighi Markaz on Pajaggi Road run by the Tableeghi Jamaat, just before Maghrib prayers. Around a thousand people were gathered at the seminary for a Shab-i-Juma (Thursday) congregation when the bomb ripped through the centre, according to reports.

Shafqat Malik, a senior official of the bomb disposal squad, said the bomb was planted inside a canister of ghee (cooking oil). “Around five kilograms of explosive material was used in the blast, which was detonated through a timed device,” he said.-dawn

An intelligence official, however, said the bomb had been brought in a sleeping-bag, and was “meant to be planted somewhere else but exploded.”

Meanwhile, two more bombs in suspicious bags in Peshawar’s Tablighi Centre were defused by the bomb disposal squad by applying water charge. The suspected explosives were placed on the second floor of the mosque where an earlier explosion had left eight people dead and 67 others injured.

AIG Shafqat Malik told that the bombs weighed at least five kilograms each and were placed in vegetable oil tins fitted with time devices.

Police spokesman Turk Ali Shah said bomb was similarly planted in a canister of ghee. The bomb was defused just before Maghrib prayers, around same time the Peshawar bomb exploded. A Shab-i-Juma congregation was also scheduled to take place at the Nowshera religious centre.

This is not the first time that a religious centre of the Tableeghi Jamaat has been targeted. In January 2012, at least 22 people were killed in a blast at a Tableeghi centre in the once militants’ infested district of Swat.

TTP distances itself from the attack

The Pakistani Taliban, whose new leader Mullah Fazlullah called for an end to attacks on civilians at the end of last year, sought to distance itself from the attack. Fazlullah has vowed to attack only government and security officials. “The Tehrik-i-Taliban Pakistan (TTP) strongly deny such inhuman activities,” Shahidullah Shahid, a Taliban spokesman, told Reuters by telephone from an undisclosed location– Reuters