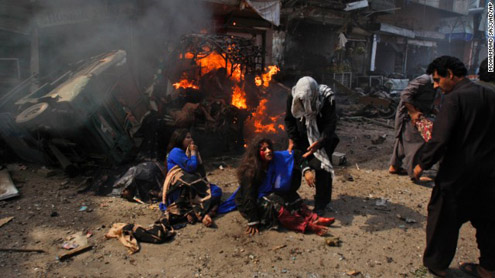 At least four woman of the same family were killed and five others, including a child, were injured when a suicide bomber blew himself up inside a house in Jamil Chowk jurisdiction of Phando police station on Monday. Police sources and eyewitness said the incident occurred in Issa Khail area near Jamil Chowak when the suicide bomber was trying to escape due to fear of police arrest. However, he entered a house where women were busy in the recitation of the holy Quran in connection with a wedding ceremony. As the suicide bomber entered the house, he detonated his explosive jacket, resulting in the killing of four women and injuring five others, including a child. A large number of people and ambulances of Rescue 1122 rushed to the blast site and retrieved the dead bodies from the house debris while the injured were shifted to Lady Reading Hospital Peshawar for medical treatment. The police said two accomplices of the suicide bomber were arrested while one escaped. A heavy contingent of police rushed to the site and cordoned off the area. Talking to media persons, Bomb Disposal Squad AIG Shafqat Malik confirmed that it was a suicide attack in which 6kg explosive was used. Meanwhile, Tehreek-e-Taliban Pakistan denied their involvement in the Peshawar suicide attack. They said some elements wanted to derail the process of peace talks by blaming Tehreek-e-Taliban for terrorist activities. Chief Minister Pervez Khattak expressed deep grief over the loss of precious lives and directed the quarters concerned to probe the tragic incidents and arrest the miscreants. The chief minister prayed for the eternal peace of the departed souls and early recovery of the injured. He alss expressed the heartiest sympathies with the affected families. He assured them that the miscreants involved in the incidents would soon be rounded up and taken to task. Khyber Pakhtunkhwa Governor Engineer Shaukatullah also strongly condemned the suicide bomb blast in Peshawar on Monday and expressed his deep shock and sorrow over the loss of precious lives. The governor called the tragic incident a highly inhuman act of terrorism and said those involved in it would no more remain at large. The governor prayed for eternal peace of the departed souls and grant of courage to the bereaved families to bear the irreparable loss with patience. At least five persons, including three schoolteachers and two brothers, were killed and another was injured in two incidents of firing in Hangu on Monday. Local sources said the first incident occurred in Kach Banda area when three schoolteachers were shot dead by unknown armed persons in front of their school gate. The teachers were waiting for their other colleagues before going home after discharging their duties. Their bodies were brought to District Headquarters Hospital Hangu for postmortem. A heavy contingent of police rushed to the site and started search operation. The miscreant succeeded in escaping. However, during a search operation, the police arrested a suspected motorcyclist at Shah Fesal check post. Meanwhile, two brothers were killed when their rival party opened indiscriminate firing on them in the Umarabad area. According to another report, two officials deputed for the security of an anti-polio vaccination team were injured in a Khyber Agency blast on Monday. Sources said militants targeted the security personnel, who were guarding the polio immunisation workers, with improvised explosive device (IED) at Shalman Road in tehsil Landikotal of Khyber Agency. Both the injured were shifted to hospital for treatment. A heavy contingent of security personnel cordoned off the area after the blast and launched a search operation, arresting several suspects.

Headway’ in Taliban talks with committee