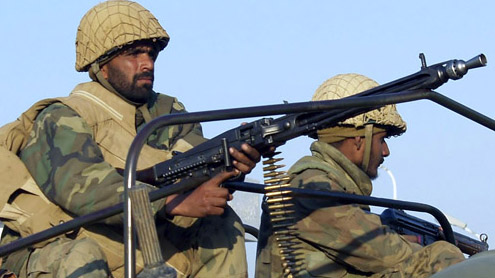 A senior army officer was killed on Tuesday in an exchange of fire with militants, the military said, after peace negotiations between the government and Pakistani Taliban insurgents broke down a day earlier. “(The) exchange of fire continues,” the ISPR said in a statement, adding the attack took place near Frontier Region Peshawar close to the Afghan border. Major Jahanzaib suffered bullet injuries and succumbed to his wounds, the military’s media wing said, adding that three militants were also killed in the exchange of fire. According to news agency Reuters, a Pakistani Taliban militant from Peshawar confirmed the attack. “Militants attacked the convoy of a security official in Peshawar and killed one army major,” he said.

“The official announcement will come shortly.” This is the second attack on security forces personnel in the last 24 hours. An attack on a security forces checkpost in Ladha area of tribal South Wazirstan agency killed one soldier late Monday night. The recent violence is likely to further hamper prospects of meaningful peace negotiations between the government and Pakistani Taliban militants. An attempt by representatives of both sides to meet and talk peace collapsed on Monday after insurgents said they executed 23 soldiers in revenge for army operations in the volatile tribal regions bordering Afghanistan. – dawn