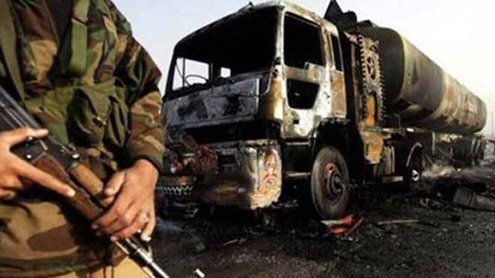 At least two people were injured on Monday when unknown militants attacked a Nato supply convoy on the Pak-Afghan Highway in Jamrud Tehsil of Khyber tribal region. Meanwhile, some nearby vehicles also sustained minor damage. Line officer Amjad Khan told Madia that the convoy of trucks was targeted near the Sur Qamar area about 10 kilometres from the Bab-i-Khyber on the main Peshawar-Jalalabad Highway. Officials reported that the militants fired two rockets on the trucks and used heavy machine guns and rifles to target the supply convoy. Security forces and militants also exchanged gunfire for half an hour following which the militants managed to flee. A heavy contingent of Frontier Corps and Khasadar Force also reached the spot and cordoned off the area as a search operation went underway.

Taliban in Orakzai claims kidnapping tribesmen from Tirah Valley Taliban militants in the Orakzai tribal region, led by Hafiz Saeed, claimed to have kidnapped tribesmen from Tirah Valley for their involvement in alleged illegal and un-Islamic activities. Taliban militants in the Orakzai tribal region have allegedly parted ways with the parent group and formed their own group Tehreek-i-Taliban Islami also known as the Orakzai Freedom Movement. The group also says that they have released all the abductees from the Orakzai Khyber Agency border but ten of them are still held captive by them. -Dawn