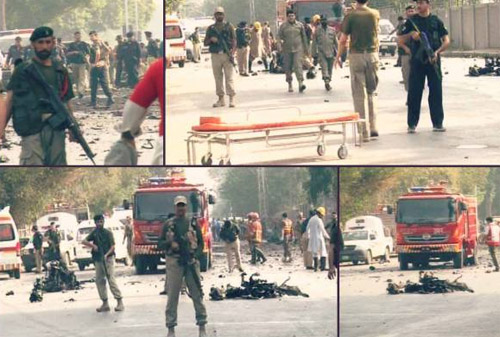 A powerful bomb blast targeting security forces in a sensitive area of Peshawar killed at least three people and injured 13 others,

According to initial reports, the blast took place on Mall Road near railway station in one of Peshawar’s sensitive areas where army and government installations are located.

Officials said the explosion targeted a convoy of Frontier Constabulary. Medics in city’s main Lady Reading hospital confirmed that three dead bodies and 13 injured were received at the hospital. A security official and a woman were among the dead, said the hospital spokesman, adding that two FC men were among the eight injured. [contentblock id=2 img=adsense.png]

Bomb disposal squad arrived at the site to ascertain nature of the blast as security forces cordoned off the area. It was not clear whether the convoy was targeted through an explosive-laden vehicle or a suicide blast. The blast was so powerful that it damaged two vehicles – a rickshaw and a motorbike – and windowpanes of nearby buildings in the area where residents of high military officials are also located.  Police and FC officials also inspected the site. – Samaa