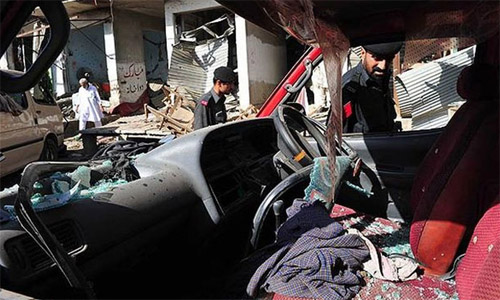 Seven students were among 11 people killed and 11 others injured in a bomb blast on a passenger van and a gunbattle between the security forces and militants in two Khyber Pakhtunkhwa cities on Thursday.

Separately, at least three people including two women were killed when an explosion ripped through a passenger van in Gilgit.

The first bomb blast took place inside a passenger van on Kohat Road in Bazid Khel area of Peshawar district.
Senior Superintendent of Police (Operations) Najeebur Rehman said that the bomb was planted in a water cooler which was placed beneath a passenger seat, while the bus was en route to the town of Hangu. “At least seven people have been killed, the bomb was planted under a seat,” senior police official Najeebur Rehman told AFP. The motive of the attack was yet not clear but police said they suspected a sectarian motive in a region known for Sunni-Shia violence. Shahid-ur-Rehman, the injured driver of the bus, said the bomb was planted by a young man.

“A young man, carrying a travel bag boarded the bus… and reserved two more seats telling us two women will join him at the next stop. At next stop he disembarked from the bus and there was a blast a few minutes later,” Rehman told AFP. Media spokesperson of Lady Reading Hospital Jamil Shah confirmed the death of seven persons in the blast. As many as 20 passengers were travelling in the van when the blast took place. Security forces reached the spot and cordoned off the area. Hospital sources said that two of the injured were critical. Additional Inspector General (AIG) bomb disposal squad Shafqat Malik said that five kilograms of explosive was used in the blast. “In the last 24 hours a bomb disposal squad has detonated six bombs in various localities of Peshawar,” Shafqat Malik, a senior police officer, told reporters at the site of the blast. [contentblock id=2 img=adsense.png]

“This is the seventh which went off and 5kg of explosives were used in the bomb.” In another incident, unknown gunmen opened indiscriminate fire on a police party on the outskirts of Yakatot area of Peshawar, killing a sub-inspector. Police retaliated and arrested the attackers. Police said that a minor girl also sustained injuries during the exchange of fire. In a separate incident, at least four militants were killed and four others arrested in a clash with security forces in Jani Khel area of Bannu district. Militants attacked security forces during search operations in Wali Noor Jani Khel area of the restive Bannu. According to reports, a key Taliban commander was also among the arrested militants. Curfew was imposed during house-to-house search operation by the forces. In another incident, at least three people including two women were killed and nine others injured when a roadside bomb hit a passenger van near Gilgit Thursday.

“The incident occurred near Haramosh village on Gilgit-Skardu Road (around 30 miles south of Gilgit) when a passenger van was hit by a roadside bomb blast,” Zain Muhammad, a police official in Gilgit, told AFP. He said the injured included five women, two men and three children, adding that all the passengers were Shias.  “It’s a sectarian attack, the passenger van was going to Haramosh which is a completely Shia-populated valley,” he said. Muhammad Ali Zia, another senior police official, confirmed the incident. “It was a roadside bomb blast, but we are yet trying to confirm whether it was blown up with a timer device or remote-controlled device,” he told AFP.  A senior official of the Gilgit-Baltistan home department said the federal interior ministry had issued an alert to the Gilgit-Baltistan government last week warning of a possible sectarian attack.

“The interior ministry letter said Shia community might be targeted on the Karakorum Highway (KKH) in reaction to the killing of a Sunni cleric in Rawalpindi recently,” he told AFP, requesting not to be named.  Gilgit-Baltistan region is relatively peaceful and bomb blasts are rare, but gunmen killed nine foreign tourists including their Pakistani guide on the base camp of Nanga Parbat in June last year.

Shia passengers travelling on the Karakorum Highway (KKH) have come under attack from extremist groups. In August 2012, armed men wearing military uniforms had stopped buses on the KKH killing 25 Shia passengers, after identifying them from their identity cards. Another 18 Shia passengers were killed in the same manner that year. -nation