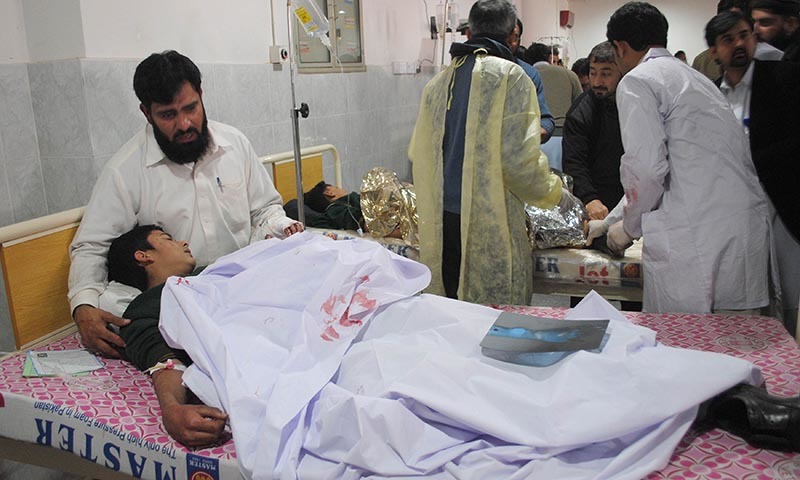 The assault on the school in Peshawar killed 131 people, most of them students, according to officials.

6:14pm – Another child succumbs to his wounds

According to DawnNews, another injured school kid has succumbed to his wounds at Leady Reading Hospital in Peshawar, raising the death toll to 131.

The provincial assembly in Punjab has unanimously passed a resolution condemning the Taliban attack in Peshawar, expressing resolve to fight till the elimination of last terrorist.

The lawmakers also expressed solidarity with the armed forces in the resolution, saying the whole nation was standing shoulder to shoulder with Pakistan Army in the ongoing Operation Zarb-i-Azb.

11 more staff members of the Army Public School including 4 lady teachers and seven male staff have been rescued by SSG commandos, according to a tweet by DG ISPR General Asim Bajwa.

The ISPR says a sixth terrorist has been killed in the the school’s last block which is under clearance. Two more students and as many teachers rescued. Terrorists have booby trapped the school premises using IEDs which is hampering the clearance process.

Prime Minister Nawaz Sharif has called for an all parties conference in Peshawar tomorrow at 11:30 AM, in light of the devastating gun and bomb attack on the army-run school. Leaders belonging to all parliamentary parties are expected to be in Peshawar tomorrow. The meeting will be held at the Governor House in Peshawar. Information Minister Senator Parvaiz Rasheed and Finance Minister Ishaq Dar have been tasked by the PM to contact parliamentary leaders and request them to attend the meeting. US Ambassador to Pakistan Richard Olson condemns the attack and issues a statement offering condolence to the families of the victims.

“The United States strongly condemns senseless and inhumane attacks on innocent students and educators, and stands in solidarity with the people of Pakistan, and all who fight the menace of terrorism,” a statement issued by the US Embassy in Islamabad says.

“Few have suffered more at the hands of terrorists and extremists than the people of Pakistan,” the statement says, adding that “that is why it remains essential for the United States and Pakistan to continue to work together to secure peace and stability in the region”.

Provincial information minister Mushtaq Ghani tells AFP the death toll has reached 130, with a similar number wounded. The toll was confirmed by another provincial minister.

Devastating accounts have come forth from the tragic incident in which witnesses described how gunmen went from classroom to classroom, shooting children, after a huge blast shook the Army Public School in Peshawar today. While speaking to media representatives after his arrival in Peshawar, Prime Minister Nawaz Sharif says that the Pakistan Army launched the Zarb-i-Azb operation and its blowback was being felt now.

“I feel that until and unless this country is cleansed from terrorism, this war and effort will not stop, no one should be doubtful of this. We have also spoken to Afghanistan about this and we will fight terrorism together.”

“Such attacks are expected in the wake of a war and the country should not lose its strength,” he says. An army helicopter flies over the Army Public School that in under attack by Taliban gunmen in Peshawar, December 16, 2014. PHOTO: REUTERS

He makes the announcement after arriving in the provincial capital city where he was given a briefing over the situation at the Army Public School. Meanwhile, read our correspondent Riaz Ahmed’s report from October on how easy it for militants to procure security forces’ uniforms.

The ISPR says that of the four blocks that the militants were confined to, security forces have managed to clear three.

It is not clear how many militants have been killed or how many still remain in the building.

There are some reports that children have been taken hostage.

DG ISPR Asim Bajwa on Twitter says that the terrorists have been pushed and confined to the “the last of four blocks of school”.

He also says four terrorists have been killed so far.”Search for remaining on, clearance underway,” he says.

Reporters at the scene report as many as 10 loud explosions at the school, saying that the operation underway is reaching a climax.

The Pakistan Tehreek-i-Insaf (PTI) Chairman Imran Khan has postponed his party’s countrywide protests scheduled for Dec 18, following the deadly terrorist attack on the school in Peshawar.

PML-N’s Marvi Memon condemns the attack and says she cannot imagine what the families and mothers of the deceased must be going through.

“The PM empathises with them and has left everything to go to Peshawar and personally oversee the incident,” she adds.

She adds: “Your children have made a huge sacrifice, you are not alone and we will end terrorism together… one day Pakistan will be cleansed from this terrorism.” State-run Radio Pakistan is reporting that 126 have been killed. It is not clear how many of the casualties include children, although an earlier figure put the death toll of students at 84.

PPP’s Qamar Zaman Qaira says Pakistan has long been a victim of terrorism and must unite to fight the scourge.

“Condemning this incident is not enough, this is a message for the world as well to see the kind of sacrifices we have to give,” he says. “I strongly condemn the terrorist attack on a school at Peshawar,” he tweets.

“This dastardly & inhuman attack exposes the real face of terrorism. My heart goes out to the families of those children who got killed by the terrorists in Peshawar.

With the tragic incident escalating, the death toll has now risen to over 120, according to

Further, two fresh blasts have been heard from within the vicinity and firing is still going on. Our correspondent Riaz Ahmad gives us a bone-chilling account of parents looking for their children at Lady Reading Hospital amid the chaos in Peshawar.

So far, at least 85 students have reached CMH hospital from the Government Commerce College to donate blood to the injured, according to our correspondent Umer Farooq.

Security sources say that some of the terrorists have managed to escape from the site after cutting barbed wires around the school premises.

A security official says some children are still being held hostage by Taliban gunman. 84 children are reported dead, with scores injured.

Hospital sources are reporting a shortage of ‘O negative’ blood at the LRH. An appeal has been made for donations.

Mudassar Abbas, a physics laboratory assistant at the school, tells AFP some students were celebrating at a party when the attack began. “I saw six or seven people walking class-to-class and opening fire on children,” he says.

A hospital security guard helps a student injured in the shootout at a school under attack by Taliban gunmen in Peshawar, Pakistan,Tuesday,. Prime Minister Nawaz Sharif leaves for Peshawar to supervise the ongoing operation against Taliban. “I have decided to proceed to Peshawar and I will supervise the operation my self,” PM Nawaz Sharif said in a short statement before his departure to Peshawar. “These are my children and it is my loss,” the premier said. Chief Minister KP Pervez Khattak says 84 children have been killed in the attack.

“The terrorists entered the school wearing FC personnel uniform,” he says. He puts the total death toll at 104. He says 23 bodies have been taken to the LRH, with 60 in CMH. Shah Farman, the KP Minister of Information says there are approximately 80-100 unconfirmed dead.

“The army is trying hard to bring the situation under control,” he says. “The operation is currently underway.” “It is unfortunate that schoolchildren were targeted.We need the country to be united and we need justice,” he adds. Shah Farman says he is not aware of the Taliban’s claim of responsibility for the attack.

Malala Speaks Against The Cowardly Act

Malala Speaks Against The Cowardly Act