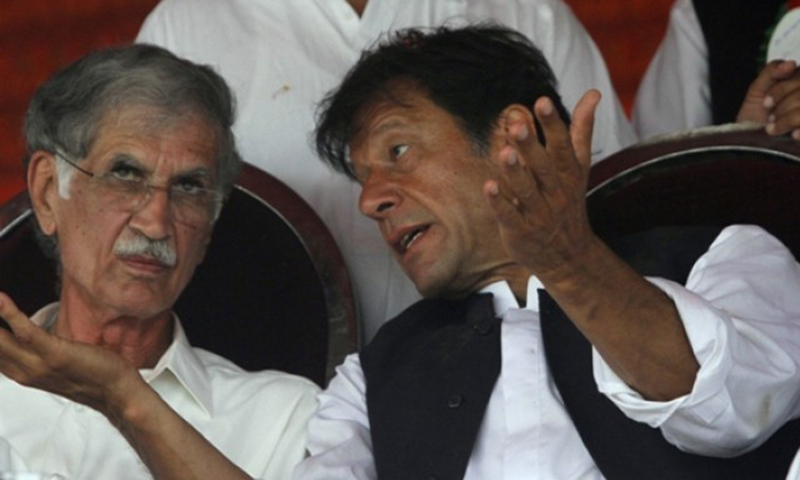 The Pakistan Tehreek-i-Insaf appeared to be in disarray a day before the Senate elections as Imran Khan and the party’s Chief Minister in Khyber Pakhtunkhwa, Pervez Khattak, were pursuing conflicting strategies to avoid an election humiliation on Thursday. After holding a meeting with the party lawmakers and coalition partners here on Wednesday, Mr Khan said at a press conference that the PTI had no alliance with any of the opposition parties in the KP Assembly for the Senate polls. He threatened to dissolve the provincial assembly if his party’s MPAs voted for independents or opposition candidates. The threat left some of the party MPAs, contacted by Dawn, in a state of confusion because Mr Khattak reportedly entered into an ‘electoral understanding’ with two of the opposition parties – PML-N and an estranged Qaumi Watan Party. The QWP was thrown out of the PTI-led provincial government in 2013 on corruption charges.

While Mr Khattak is reportedly holding behind-the-scene contacts with the PML-N and QWP to cobble together an alliance for the Senate polls, Imran Khan’s announcement was seen as an attempt to thwart the chief minister’s political pragmatism. “We will go to any extent (dissolving the assembly) to ensure fair election,” Mr Khan told reporters at the Chief Minister’s House, adding that they didn’t need votes from the PML-N and QWP under the current situation. A senior PML-N leader told Dawn that Mr Khattak had approached N-League leaders on Tuesday night to forge an electoral alliance for the Senate polls. According to a well-informed source, Mr Khattak was in session with an important QWP leader and both held a phone conversation with a key PML-N figure in the province for arriving at an electoral understanding. Three PTI MPAs told Dawn that the chief minister had made back-to-back contacts with the two opposition parties on Tuesday to seal a formidable 93-vote alliance.