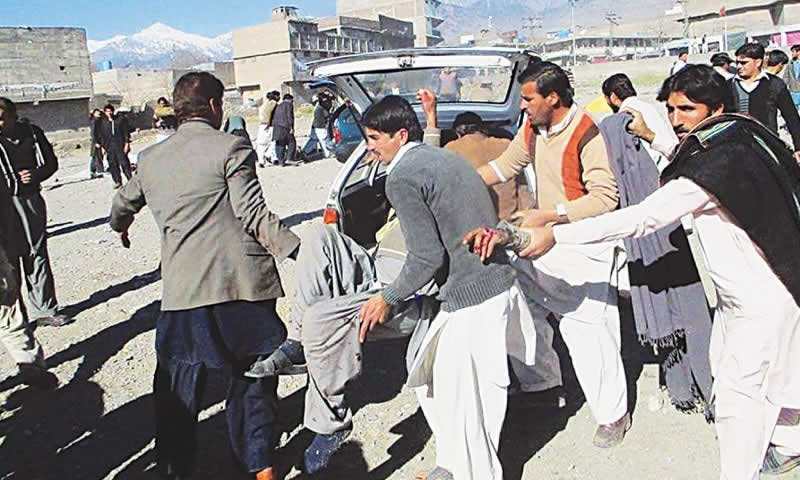 At least 25 people were killed and 62 injured on Sunday when a device containing about 35 kilograms of explosives ripped through a makeshift market in Parachinar town of Kurram tribal region, residents and hospital sources said.

Officials said that the device kept in a sack exploded when a large number of people were buying second-hand clothes.

A huge pall of black smoke and dust enveloped the entire area after the blast. According to witnesses, pieces of human flesh lay scattered everywhere. Israr Hussain, head of the bomb disposal squad, told reporters that 35 to 40 kilograms of explosives had been used in the device. In a rather unusual development, two militant groups claimed responsibility for the attack, with one of them saying the target was the Shia community. The groups identified themselves as Lashkar-i-Jhangvi Al Alami and Ansarul Mujahideen based in South Waziristan Agency. A statement released to a foreign media channel and attributed to the spokesman for the Jhangvi group, Ali bin Sufian, said the attack had been carried out against the Shia elements who were supporting Syrian President Bashar al-Assad and the Iranian government.

“We warn … parents that if they don’t stop their children from ongoing (sic) conflict in Syria they should remain prepared for more such attacks,” Sufian said. Officials confirmed 19 deaths, but they said they feared the death toll could rise because many of the wounded were in critical condition. One of the officials said that 62 wounded had been brought to the agency headquarters hospital in the town. In a statement issued in Peshawar, the ISPR said that 23 seriously wounded people had been airlifted by two helicopters. Rescue 1122 said that 17 of the injured had been shifted to CMH Peshawar. A family from Zeran Village near Parachinar lost four members — the father and three sons. They were in the market when the blast occurred.

COAS Raheel Sharif is the Most Popular Figure in Pakistan: Imran