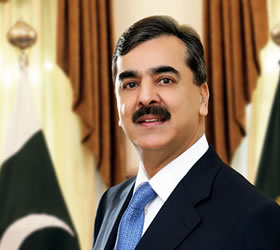 ISLAMABAD, Sept 28 (APP): Prime Minister Syed Yusuf Raza Gilani said on Tuesday that bringing less developed areas at par with developed regions of the country was priority of the Pakistan Peoples Party government. Talking to a group of MNAs from Federally Administered Tribal Areas (FATA) here at his chamber in Parliament House, Gilani said the government had allocated substantial development funds for this purpose.

He, however, noted that due to devastating floods, the government had to curtail Public Sector Development Programme (PSDP) to divert large chunk of funds for the rehabilitation and reconstruction of the flood affected areas.He said after the completion of the relief and rescue operation, the government would review allocations and FATA development projects would be given priority. The Prime Minister appreciated the role of FATA parliamentarians for the support of democratic process in the country.

The MNAs thanked the Prime Minister for his keen interest in the uplift of FATA to bring the region at par with other areas. They apprised him of status of various development projects in FATA and the relief activities being undertaken by the parliamentarians for the flood affected people.