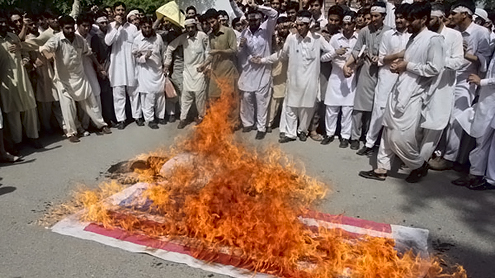 ISLAMABAD: Thousands of protesters angry at the anti-Islam film clashed with police close to Islamabad’s diplomatic enclave on Thursday in chaotic scenes that left at least 50 people injured.

Officers fired tear gas and live rounds as the demonstrators, many armed with wooden clubs, tried to reach the heavily-guarded enclave, home to most Western embassies, including the US, British and French missions. The government called in the army to protect the area after protesters broke through a barrier of shipping containers set up by police to block a road leading to the enclave.

The movie produced by US-based extremist Christians, has triggered protests in at least 20 countries since excerpts were posted online, and more than 30 people have been killed in violence linked to the film. There have been dozens of demonstrations around Pakistan over the past week and at least two people have been killed, but Thursday was the first time protests in the capital had turned violent. An initial demonstration of around 1,000 swelled to around 5,000 with the arrival of protesters carrying the flags of hardline groups Jamaatud Dawa, Jamaat-e-Islami and Sipah-e-Sahaba – which is banned by the Pakistan government.

Police fired tear gas and live rounds as the protesters, shouting, “We are ready to die to safeguard the Prophet (PBUH)’s honour,” and demanding punishment for those who insult Islam, stormed the container barrier. The firing scattered the crowd, but they returned to pelt officers with stones and breach the cordon, before torching a police post next to the nearby five-star Serena Hotel and fighting officers in chaotic scenes. The luxury hotel, much used by visiting Westerners, came under attack as a few demonstrators managed to enter the car park and damage vehicles, while others picked up tear gas shells fired by police and threw them into the hotel’s compound.

Doctor Razia Sultana of the Services Hospital Islamabad said at least 44 police and six civilians were hurt in the clashes, with the majority of injuries caused by stones and tear-gas shells. The Islamabad demonstration dispersed in the early evening, around five hours after it started, as government paramilitary helicopters hovered overhead. Protester Rehan Ahmad explained the crowd’s fury, “Islam is often ridiculed by America and the West and blasphemy is committed against our Prophet (PBUH) in the name of freedom of expression,” he said. There was no mention at the protest of cartoons published on Wednesday by French magazine Charlie Hebdo caricaturing Prophet Muhammad (PBUH).

France has prepared for a backlash over the cartoons, saying it will close diplomatic missions, cultural centres and French schools in around 20 Muslim countries on Friday for fear of violent protests. There were more rallies against the film elsewhere in Pakistan on Thursday, the largest of which was in Lahore, where a boisterous crowd of around 4,000 staged a peaceful gathering.Other smaller protests were seen in Karachi, Multan, Chaman and Azad Kashmir.
Larger gatherings are expected on Friday, which the government has declared a national holiday and “day of love for the Prophet (PBUH)” as a mark of solidarity with fellow Muslims angered by the film. Many political and religious groups have called for people to take to the streets, and Information Minister Qamar Zaman Kaira called for restraint.

“I appeal to the people to remain peaceful tomorrow as any violent protest will harm the country,” Kaira said. “Indulgence in violence will not convey any positive message abroad.” In Quetta, some 2,000 students paraded on the main airport road before gathering outside the Quetta Press Club where they burnt US and Israeli flags. Elsewhere in Balochistan, around 100 Christians denounced the film in their own protest in Chaman. – Dailytimes