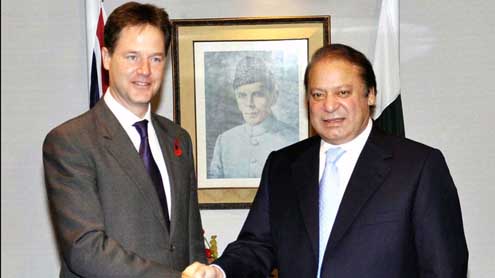 Providing no other details about who was taking part or what would be discussed, Prime Minister Nawaz Sharif Thursday said talks have started with the Pakistani Taliban. He said peace talks must take place inside the framework of Pakistan’s constitution.

That could pose difficulties because the Tehrik-i-Taliban Pakistani (TTP) was demanding a much harsher version of Islamic law (Shariah Law) across the country than allowed in the constitution. Sharif was elected in part by promising to negotiate with militants in the country’s northwest who have killed thousands of civilians and security forces. However, the militants have shown little appetite for talks.

Sharif’s comments came during a meeting in London with British Deputy Prime Minister Nick Clegg and were released in a statement by the Pakistani High Commission there. Many in Pakistan are frustrated that years of military operations in the tribal areas, where the militants have their safe havens, have failed to end the violence. They see negotiations as a necessary step. Representatives of the country’s major political parties backed Sharif’s plan for negotiations in early September. His government has been under pressure to show progress ever since.

The Taliban militants have demanded that Pakistan stop supporting the US-led war in Afghanistan, and that the Pakistani army withdraws troops from the tribal areas of northwest Pakistan that border with Afghanistan. They’ve also demanded an end to American drone strikes in the tribal areas. Drones are a particular touchy subject for many Pakistanis who view them as an infringement on their sovereignty.

Meanwhile, Pakistan Tehrik-i-Insaf (PTI) chief Imran Khan threatened Thursday to cut off Nato supplies moving through Pakistan if the US launches any drone strikes during the talks.The party of the cricket legend-turned-politician has been an outspoken critic of the US drone policy. His party controls the provincial government in Khyber Pakhtunkhwa (KP) province in northern Pakistan, one of two routes supplies move in and out of Afghanistan. Speaking at a news conference in the eastern city of Lahore, Khan said his party had the capability to stop the Nato supplies and warned that his words must not be taken lightly.

The Pakistani Taliban has similar viewpoints and loyalties as the Afghan Taliban but a separate structure with separate leadership. Other issues discussed during Sharif-Clegg meeting During Thursday’s meeting, Prime Minister Sharif also apprised Clegg on relations with India, energy situation and economic reforms agenda of his government, said the press release. He said the government could not wait and watch innocent people and members of law-enforcement agencies being murdered on the streets anymore.

The government was making its counter-terrorism forces and intelligence agencies fully capable to root out extremism and terrorism from the country, said the premier. The recently promulgated Protection of Pakistan Ordinance also came into discussion. Sharif said it was specifically prepared to deal with the armed outlaws. On Pakistan-India relations, the prime minister said that he had made sincere efforts to resolve all outstanding issues with India. “We have made India bashing a non-issue in Pakistan but unfortunately, Indian politicians are still engaged in unwarranted Pakistan bashing,” he added. On reduction of energy subsidy, he said some segments of Pakistani society were not happy with partial withdrawal of the subsidy on electricity but the direction of the present government he said was correct.

PM Sharif vowed to reduce significantly the demand-supply gap as well as price of electricity in the country in next three to four years. The British deputy prime minister told Prime Minister Sharif that he and his government were full of admiration for his pro-active approach of reaching out to India for peace before and after elections. He assured that the United Kingdom will fully support Pakistan’s case for GSP Plus status in the EU market. Clegg also appreciated recently introduced economic reforms agenda by the Pakistan government.

US Criticises Germany and China policies