Peace Dialogue with Taliban to be taken forward: Cabinet 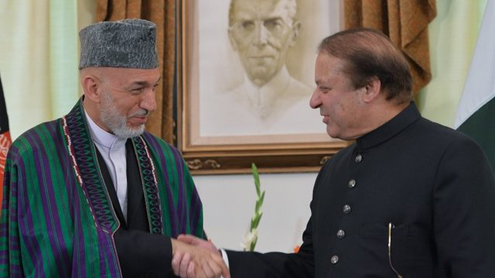 Prime Minister Nawaz Sharif on Monday warned peace could not be achieved “by unleashing senseless force”, in his first public speech since a US drone strike killed Taliban leader Hakimullah Mehsud.

The killing of Mehsud on Friday as government representatives prepared to meet his Tehreek-e-Taliban Pakistan (TTP) factiontriggered an angry response from Islamabad while Afghan President Hamid Karzai said the strike “took place at an unsuitable time”. Interior Minister Chaudhry Nisar on Saturday accused Washington of sabotaging peace efforts with the drone strike. Though Nawaz did not mention the drone strike directly, he stressed his desire to “give peace a chance”.

“My government is firmly resolved to bringing the cycle of bloodshed and violence to an end. “But it cannot be done overnight, nor can it be done by unleashing senseless force against our citizens, without first making every effort to bring the misguided and confused elements of society, back to the mainstream,” he said in a speech after army exercises near Bahawalpur. Nawaz held a meeting of his cabinet’s security committee on Monday after a furious Nisar said “every aspect” of Islamabad’s ties with Washington would be reviewed.

The cabinet decided to honour the decisions taken by the all-parties conference and carry forward the peace dialogue without letting this process derailed. “Pakistan has the right to take its decisions on its own according to its interests,” Prime Minister Nawaz said while addressing the special meeting of the cabinet. He said Pakistan has paid the highest price of terrorism, rendering unmatchable sacrifices. “We are fully alive to the severity of the issue, but we should be let to address our problems according to our own strategy”, he observed. If there cannot be cooperation in the process we have initiated to end terrorism by leaving the path of revenge, it should at least not be damaged, he remarked.

Afghan leader Karzai meanwhile told a US Congress delegation visiting Kabul he hoped the peace process, still at an embryonic stage, did not suffer as a result, according to a statement released by his office late Sunday. Prime Minister Nawaz said his government was firmly committed to end bloodshed and violence in the country and stressed complete unity amongst all stakeholders to tackle the challenge. Nawaz said that in this regard it was vital that the political parties, military, and civil society were on the same page, so as to create an enabling environment necessary to tackle this menace.

“Unity among all stakeholders, including political parties, military forces, executive, judiciary, parliament and the media, is very much required in these difficult times,” the premier said. “No one wants any further bloodshed,” he stressed, adding that “we have seen enough of that and our soldiers have paid the highest price in the form of embracing martyrdom.

Their toil and blood has contributed towards making the defence of the country resolute and impregnable”. The prime minister witnessed a show of accurate air and ground based firepower and coordination between the various wings. He was accompanied by Chief of Army Staff General Ashfaq Parvez Kayani, services chiefs, federal ministers and members of parliament. Addressing the troops, Prime Minister Nawaz said gone are the days when Pakistan’s national security policies were determined through telephone calls from abroad.

“We now have a democratically elected government, chosen by the people of Pakistan.” He said it was the chosen government that took the decision to make the nation a nuclear power, indigenously manufacture the JF-17 Thunder aircraft, the Al-Khalid and Al-Zarar battle tanks and many more national security systems. “The real power lies in the hands of citizens of Pakistan to decide what they want,” the prime minister said. agencies- Dailytimes