by Top
in Featured, National
0 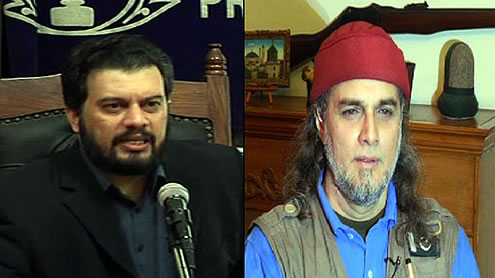 During a news conference, Emaad Khalid said Zaid Hamid used to send text messages, emails and policy papers to 1,000 army officers claiming that General Kayani had sold out and was working for the Americans. He added that Zaid Hamid was instigating junior officers of the army to stage a coup against General Kayani and the federal government.

According to Khalid, Zaid Hamid had acknowledged that he was a supporter and advisor of former military dictator Pervez Musharraf. “Zaid Hamid wanted an army chief like Musharraf who destroyed the image of Pakistan.” Khalid further said that General Kayani had restored the image of the Pakistan Army.

Khalid said that Zaid Hamid benefited from anarchy and chaos in Pakistan and was a supporter of sectarian violence in the country. Senior Journalist and Geo News anchor, Hamid Mir said the government was aware of Zaid Hamid’s conspiracies but no action had been taken against him.

Chairman of the Pakistan Ulema Council, Tahir Ashrafi called Zaid Hamid and enemy of Islam and Pakistan. Ashrafi called on the judiciary and government to take immediate notice of conspiracies being hatched by Zaid Hamid. – thenews