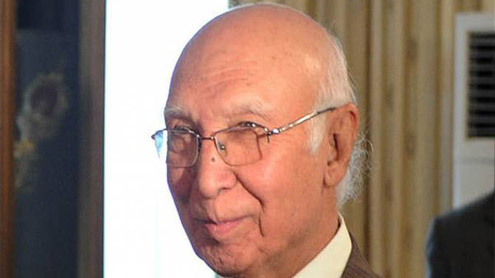 Advisor to the Prime Minister on Foreign Affairs and National Security Sartaj Aziz said on Wednesday the United States had assured Pakistan of not making drone attacks during talks with Taliban.

He was briefing the Senate Committee on Foreign Affairs, Kashmir Affairs and Gilgit-Baltistan, which met here with Haji Muhammad Adeel in the chair. Sartaj Aziz said the US had been conveyed that Taliban chief Hakimullah Mehsud’s killing in a drone strike had hampered the dialogue process. At present, no talks were being held, he added.

Sartaj Aziz also talked about the withdrawal of US and NATO forces from Afghanistan in 2014 and said an unstable Afghanistan was not in Pakistan’s interest. In case of fighting, Afghan refugees would again flood Pakistan, he added.

Regrading the Prime Minister’s recent US visit, he said Pakistan was interested in trade not in aid and the same message was conveyed to the Americans. The visit was significant as it had enhanced bilateral relations between the two countries, he added. He said new chief of Tahrik-e-Taliban Pakistan (TTP) Mulla Fazlullah was in Afghanistan not in Pakistan.