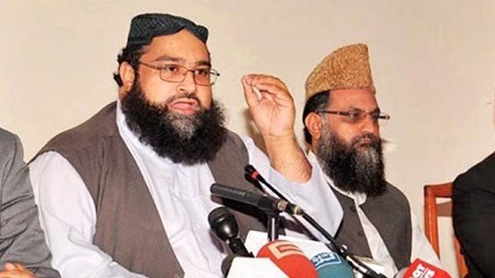 Maulana Hafiz Mohammad Tahir Ashrafi, chairman of the Pakistan Ulema Council and a member of the Council of Islamic Ideology (CII), has come up with a 14-point code of conduct to be observed by religious organisations to end sectarian violence in the country.

The Maulana forwarded the code to the CII secretariat on Sunday with a request that a special meeting of the council be called to discuss it. The code of conduct calls upon all religious parties to distance themselves from violence in the name of religion. It says that no Muslim sect can be termed infidel. It also denounces any attempts to amend blasphemy laws. “We have seen that leaders of the Shia community have agreed to have a code of conduct to be observed by all parties. After the recent Rawalpindi tragedy, Maulana Ahmed Ludhianvi also expressed willingness to observe some code if formulated by the CII,” Maulana Ashrafi told Dawn.

“It is a responsibility of the council to guide the government on various matters in the light of Quran and Sunnah. “We have seen that despite numerous efforts made by the authorities the country is facing an explosive situation because of sectarianism,” Maulana Ashrafi said in a letter he sent to the CII. The proposed code of conduct says that anyone making derogatory remarks about the households of the Prophet (Peace Be Upon Him), including his respected wives and companions and Imam Mehdi should be declared as renegade from Islamic faith. It suggests stopping any speech and literature which are disliked by another sect or incited hatred.

The code says that recordings of hate speeches and spreading them through any medium should be banned. Any slogan inciting hatred or instigating violence should be avoided by religious groups and all sects should respect places of worship and traditional norms of others. It suggests a ban on display of arms, especially illegal weapons, in all religious congregations and religious places. The code of conduct desires that speeches, especially during Friday prayers, should promote sectarian harmony and peace. It calls for holding regular seminars addressed by religious scholars to promote sectarian harmony.

It proposes setting up of a board comprising ulema belonging to various sects to resolve differences. Maulana Tahir Ashrafi said in his letter that the code of conduct would have to be implemented by the government which should deal with its violator in accordance with law. The letter also calls upon the council to recommend strict measures to be taken against elements violating the sanctity of religious places of non-Muslims. The Maulana said there were laws in the country about such violations but either they were lenient or punishments were insufficient. “We need to ensure implementation of laws to achieve this gigantic task of maintaining peace and harmony among sects and various religions in Pakistan.” A similar effort was made in mid-1990s by the Milli Yakjehti Council which had come into being after the formation of Sipah-i-Mohammad, an offshoot of now banned Tehreek-i-Jaferia led by Allama Sajid Naqvi.

Maulana Ashrafi was a founding member of the Milli Yakjehti Council. “I persuaded the leadership of banned Sipah-i-Sahaba to join the Milli Yakjehti Council and shun violence and they agreed,” the Maulana said. “It is time for clerics and Islamic scholars to come forward and play their due role, otherwise history will not remember them in good words.” Leaders of various sects and religious groups refused to comment on the code of conduct before studying it thoroughly. -Dawn