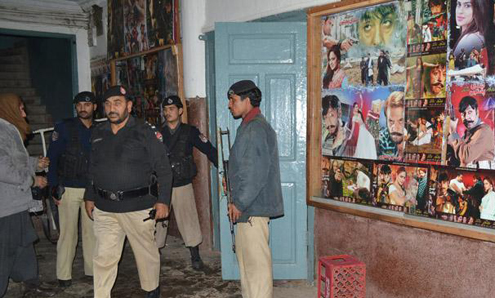 PESHAWAR: At least four people were killed and 31 wounded late Sunday when unidentified attackers hurled two grenades at a cinema in Peshawar, police and medics said.
The attack on the Picture House cinema in Peshawar took place as some 90 people were watching a late night show of the film ‘Ziddi Pakhtun’, police said.

“At least four people have been killed and 31 injured. Attackers hurled two grenades and fled the scene,” Faisal Mukhtar, a senior police official, told AFP. Mukhtar said that the hand grenades were hurled from back seats of the single screen cinema house. A stampede following the blasts was responsible for many of the injuries, he added.

Jamil Shah, a spokesman for Peshawar’s Lady Reading Hospital, said three bodies and 31 injured people had so far been taken to his hospital. No one had claimed responsibility for the attack, but police said that cinema houses in the city were already under threat.
“We had informed the cinema owner about the possible threats,” Najeebur Rahman, a senior police officer, told AFP.

Meanwhile, the Khyber Pakhtunkhwa government has announced Rs 500,000 each for the families of those who lost their lives in the attack, and Rs 200,000 for all the injured. Picture House cinema is located on Cinema Road near Qissa Khwani Bazaar and was the target of a low intensity blast last year as well.

Peshawar is a frontline city in Pakistan’s battle against Islamist insurgents, who regard films as sinful. The Taliban closed down cinemas in the scenic Swat valley in the country’s northwest which they controlled from 2007-2009.

However, speaking to a TV channel, a spokesman for the Tehreek-e-Taliban Pakistan said the banned militant outfit was not behind the Sunday attack. – Dawn