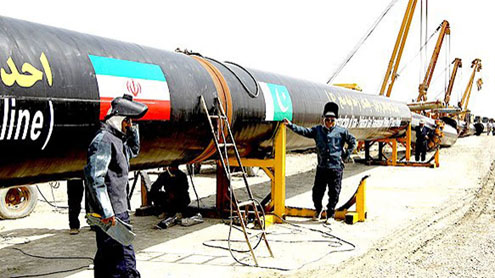 Minister for Petroleum and Natural Resources Shahid Khaqan Abbasi informed the National Assembly on Monday that the Iran-Pakistan gas pipeline project was now off the table. “In the absence of international sanctions the project can be completed within three years, but the government cannot take it any further at the moment because international sanctions against Iran are a serious issue,” he said in reply to a supplementary question put by PML-N lawmaker Zahra Wadood.

Former president Asif Ali Zardari and his Iranian counterpart Mahmoud Ahmadinejad had announced in February last year to complete the project in 15 months. But analysts doubted the sincerity of the present government to follow up the venture because of close ties between the PML-N leadership and Saudi Arabia which is reported to be against the project.

Pakistan will have to pay a penalty if it failed to lay the $1.3 billion pipeline within its territory by December this year, but the petroleum minister told the house that the job could be done only after the lifting of sanctions against Iran. Pakistan has been persuading Iran to review the timeline of the project.   Dwan