Nawaz in talks to decide ‘Exit deal’ for Musharraf 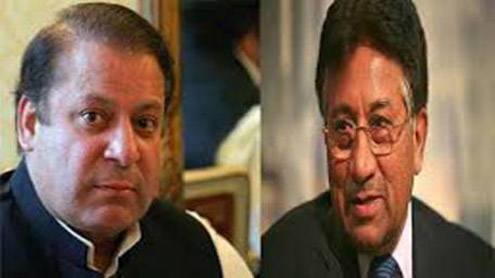 The army chief and DG ISI on Tuesday paid a “flying visit” to the PM House to exchange notes with Prime Minister Nawaz Sharif notably in the backdrop of Pervez Musharraf’s possible exit from Pakistan. Although the Pakistan Army has remained tightlipped on the meeting’s agenda, informed sources said that the meeting mainly discussed the Musharraf issue as well as the security situation in the country following the expiry of one-month ceasefire by the TTP on Tuesday. Interestingly, Chief of Army Staff (COAS) General Raheel Sharif and ISI DG Lieutenant General Zaheerul Islam Janjua had landed at the PM House via a helicopter to meet Prime Minister Nawaz Sharif instead of following the land route.

Prior to the troika meeting, a scheduled meet-up on national security was called off. Sources in the PM Secretariat said a three-pronged strategy for talks with the TTP was also discussed during the meeting, and the military brass opposed negotiations on the release of the TTP combatants presently detained by the security agencies. Speculations are rife that former military ruler Pervez Musharraf is likely to leave the country, as the GHQ reportedly presses the government to pave way for the ex-general’s safe exit from Pakistan given that he has been indicted in the high treason case.

The Interior Ministry is yet to decide on removing Musharraf’s name from the Exit Control List (ECL). Apart from meeting the top military brass to discuss this issue, PM Nawaz Sharif Tuesday chaired another meeting attended by his close aides in the ruling PML-N. According to sources, the majority of PML-N leaders opposed removing Musharraf’s name from the ECL, arguing that punishing the former military ruler would ensure that there would be “no future violations of the constitution”.

The PML-N leaders reportedly said that allowing Musharraf to leave the country would be perceived as a covert and controversial deal and it would be difficult for the government to defend this move. Some leaders, however, opined that it was high time for the PML-N government to get rid of “Musharraf issue” and focus on development and security issue. They contended that the government should remove the former military dictator’s name from the ECL since courts would not object to any such move. The prime minister reportedly told the participants of the meeting that since there is an independent judiciary in the country, the government would respect its verdict. -Dawn