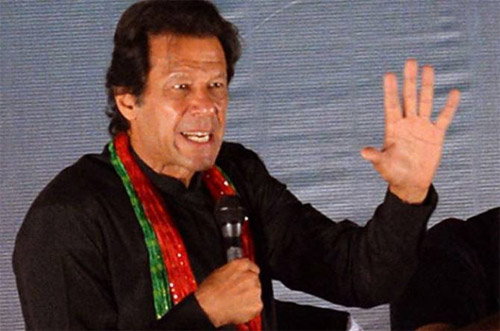 PTI to end sit-in if PM reveals all assets

Claiming that satellite imaging has shown Pakistan Tehreek-e-Insaf’s (PTI) rally in Lahore was the biggest ever in the political history of Pakistan, party chairman Imran Khan Tuesday

Asserted that approximately up to 1.1 million people turned out at Minar-e-Pakistan on Sunday. “It is heartening to note that the nation is now wide-awake and no one can lull it back to sleep.

By shaking yourself out of that 60 year-old slumber of submission, you have laid down the foundation of’ New Pakistan’ and closed the doors on the old one”, Khan said during his prime time address to his workers sitting in outside the building of Pakistani legislative assembly in a bid to oust Prime Minister Nawaz Sharif. Khan, along with populist cleric Tahir-ul-Qadri, has been staging a sit-in in capital Islamabad since August 15. Last week he took his protest to Pakistan‘s largest city Karachi and on Sunday he addressed thousands of people in his home town and Pakistan‘s second largest city — Lahore, which is also the home town of Sharif. [contentblock id=2 img=adsense.png]

Later, Khan announced that PTI-led government in Khyber Pakhtunkhwa was all set to hold local government elections in November. “After Balochistan, KPK will become the second province to  go to local government polls”, Khan said promising a free, fair, and independent vote. During the course of his address, Khan also blared out that PTI had organized a mass slaughter of sacrificial animals on Eid-ul-Azha (October 6) in the D-Chowk in front of Parliament House. “I will celebrate the Muslim festival of Eid-e-Qurban at the venue of our protest sit-in and sacrifice animals in the name of Allah here”, Khan said.

Responding to rumours that authorities had decided not to let the sacrificial animals through to the site of sit-in, Khan said the government would be held responsible for any attempt to block the passage of vehicles transporting the sacrificial cattle/sheep/goats to D-Chowk. “The animals will be slaughtered in the D-Chowk, come what may”, Khan said taking a vow to see to it personally. -samaa