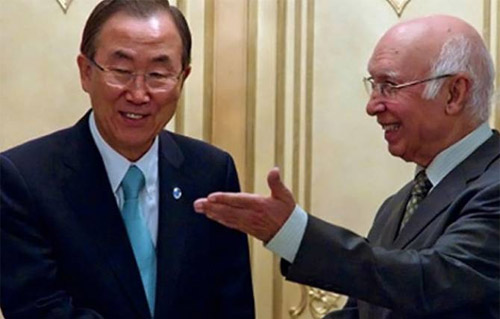 In a letter to the United Nations regarding security situation along the Line of Control (LoC) and the working boundary owing to deliberate and unprovoked ceasefire violations by India,

Pakistan has sought help of the world body to calm the situation besides urging it to resolve the issue of Kashmir in accordance with the Security Council resolutions.

In the letter addressed to UN Secretary General Ban Ki-moon, Adviser to the Prime Minister on National Security and Foreign Affairs Sartaj Aziz sought the world body’s intervention in resolving the issue between the two neighbouring countries. The letter also underlines the need to resolve the issue of Kashmir in accordance with the resolutions of the UN Security Council, and recalls the role and responsibility of the United Nations and the international community in that regard, said the Foreign Office.

The letter comes at a time when firing along the LoC and the working boundary has left 17 civilians dead in the worst violation in a decade.  The letter, released to the media by Foreign Office spokesperson Tasnim Aslam, reads, “The Jammu and Kashmir dispute is one of the long outstanding issues on the agenda of the United Nations Security Council, whose resolutions promising the holding of a plebiscite, under the auspices of the United Nations, for self-determination of the people of Jammu and Kashmir, remain valid though unimplemented till date.”

The letter further says, “For decades, Pakistan has been reminding the United Nations and the international community to fulfill that promise, in the interest of durable peace and security in the region.”  “In his address to the UN General Assembly on 26 September, Prime Minister Nawaz Sharif had emphasised that the core issue of Jammu and Kashmir needed to be resolved. This is the responsibility of the international community. We cannot draw a veil on the issue of Kashmir, until it is addressed in accordance with the wishes of the people of Jammu and Kashmir. [contentblock id=2 img=adsense.png]

The Prime Minister had also reiterated Pakistan’s readiness to work for resolution of this issue through negotiations.” “You (the secretary general) would also recall that, in his meeting with you last month; the prime minister had underlined the need to implement UN Security Council resolutions on Jammu and Kashmir, and had also stressed the need to resolve the core issues between the two countries.”  “Unfortunately, India has adopted a policy that runs counter to its stated desire to engage in a serious bilateral dialogue with Pakistan. India cancelled, unilaterally and without any plausible justification, the foreign secretary level talks that were scheduled to be held on 25 August 2014.”

The letter says, “While exercising its right to self-defence, Pakistan has exercised utmost restraint and responsibility in responding to these provocations. The Government of Pakistan sincerely hopes that better sense would prevail on the Indian side to prevent the situation from spiraling out of control.” “Pakistan appreciates your statement of October 9 in which you expressed concern about the recent escalation of violence along the Line of Control between Pakistan and India, and have deplored the loss of lives and the displacement of civilians on both sides. You have also encouraged the Governments of Pakistan and India to resolve all differences through dialogue.” the letter reads further.

“Your statement is timely and significant given the historic role and responsibility of the United Nations towards the situation in Jammu and Kashmir, where the United Nations Military Observer Group in India and Pakistan (UNMOGIP) also continues to carry out its mandate related to the strict observance of the ceasefire. Incidentally, as I write, UNMOGIP personnel are being escorted to areas along the Line of Control, to observe first-hand the ongoing ceasefire violations by the Indian side.”  “Pakistan remains committed to peaceful resolution of all issues between India and Pakistan, including the core issue of Jammu and Kashmir.

This is in the best interest of both India and Pakistan and the region.” “Pakistan believes that the United Nations has an important role to play in promoting this objective, including through your good offices, which we have always welcomed, and the crucial role of the UNMOGIP on ground, which needs to be strengthened and facilitated under the current circumstances.” “I would also be grateful if you could have this letter circulated as an official document of the Security Council. Please accept, Excellency, the assurances of my highest consideration,” the letter concludes. -nation