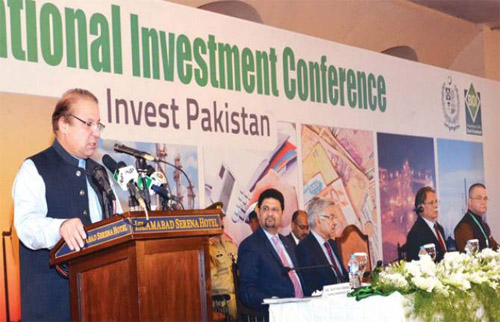 Coming down hard on Pakistan Tehreek-e-Insaf (PTI) and Pakistan Awami Tehreek (PAT), Prime Minister Nawaz Sharif on Monday said the country would move towards development while the sit-ins, aimed at hampering uplift, would fizzle out.

“PTI and PAT are hampering Pakistan’s progress and blocking its way to prosperity,” said Prime Minister Nawaz Sharif while talking to media persons after attending a two-day International Investment Conference.

He criticised PTI and PAT for holding sit-ins in the federal capital as, he said, they were impeding the development of the country. He advised them to think whether they had any interest in the prosperity of the country or not.
“We do not want to depreciate rupee; rather we want to increase its value,” the premier said and added his government had laid foundation of mature politics and this tradition should be pushed forward in future. Nawaz went on saying the government should be allowed to work to eliminate unemployment and terrorism and improve internal as well external security challenges.  To a question, the prime minister said an important visit of the Chinese president was cancelled due to the sit-ins in the federal capital. To another query, the premier said, “No corruption case has so far surfaced during the tenure of his government.”

Earlier, addressing the International Investment Conference, Prime Minister Nawaz Sharif said Pakistan was offering business-friendly environment and space for foreign direct investment without any restrictions. “The country allows 100 percent foreign equity and there is no limit on repatriation of profits, particularly in large-scale infrastructure and manufacturing sectors. [contentblock id=2 img=adsense.png] Stringent monitoring of vital ingredients required for realising higher rates of return on investment such as a stable economic growth, capital controls and exchange rates are visibly showing healthy upward trends,” he added. Nawaz Sharif told the participants of the conference that our projected GDP growth ranges between 4 and 6 percent and is satisfactorily higher in comparison to the past when it consistently failed to cross the 3 percent barrier. “I expect that our economic policies will cause capital formation, create employment opportunities and increase tax-GDP ratio, currently, counted as the lowest in the region,” the premier hoped.

“Our pressing priority has been to implement a comprehensive macro-economic course, stipulating increase in revenue, controlling expenditures and reducing fiscal deficit. We have devised a vast development portfolio aimed at upgrading the national infrastructure. Our efforts have successfully stabilised currency, increased foreign exchange reserves and controlled inflation,” he claimed. Talking about the economic policies of the incumbent government, the prime minister said: “Confidence of offshore investors was boosted when the gradually improving macroeconomic indicators brought oversubscription of the government-backed Eurobond issue. The booming stock markets of Pakistan are vindicating progressive economic initiatives taken by the government,” he added.

Nawaz Sharif, speaking about the ongoing privatisation programme of the government, said, “We are very transparently disposing of partial equity in a large-scale public sector enterprises, the latest being that of Oil and Gas Development Corporation as well as of Pakistan Petroleum Limited. We have taken similar steps about the largest banking house, Habib Bank Limited, along with large high street banking concerns, United Bank Limited and Allied Bank Limited.” He invited the foreign investors to participate in the privatisation programme. The premier further said: “We have asked our private sector to set up an LNG-import terminal with the aim to replace costly furnace oil power generation. We will soon build an LNG Terminal at Gwadar Port, the third largest warm water port of Pakistan located in mineral-rich Balochistan.

He further remarked the potential growth sectors such as infrastructure, power and natural resources were open to a large-scale investment. He said: “We also provide exclusive economic zones and infrastructure subsidies as well as research and development support.” Referring to youth, the prime minister said Pakistan was a demographically vibrant country with an estimated 9th largest available workforce. Its estimated 110 million working population constituted 60% of the total population making Pakistan rich in terms of human resource, particularly, when majority of it consisted of youth. Similarly, he added Pakistan offered avenues for developing its vast reservoirs of diverse agricultural, industrial, services, natural and mineral resource portfolios located in accessible contiguous areas, a prospect that promised to be no less than ideal.

Talking about the energy crisis, Nawaz Sharif said: “We have added 1,500MW of operational capacity to our national grid and have put in pipeline numerous projects whose production will soon outstrip demand. We plan privatising power distribution network along with rationalisation of tariff that will make investment in the power sector very attractive.”  “We resolve to improve the lot of Pakistanis through massive capital infusion in economic body politic of Pakistan by investing it in viable development initiatives. As a relief measure to subsidise meagre incomes of a considerably large segment of Pakistanis, our government is already spending around Rs 80 billion on various income support and employment generation schemes,” he concluded. -nation

Power tariff up by 52 Paisas for Sept