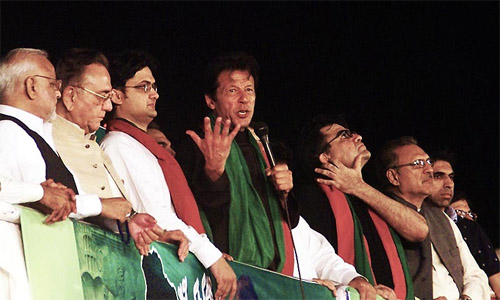 The fear of accountability has forced the former president Asif Ali Zardari and sitting prime minister Nawaz Sharif to form an unholy alliance.

It was stated by cricketer-turned politician Imran Khan while addressing the protestors at a sit-in that his party, Pakistan Tehreek-e-Insaf (PTI), has been staging outside Parliament House for over two months.

Hitting out at their covert connivance, Khan said that both Sharif and Pakistan People’s Party (PPP) co-chairman Zardari were comrades-in-corruption. “The ‘kayfabe’ between the two was going on smoothly until we blew their cover. They have been pulling the wool around the eyes of nation for so long. The cronies now stand exposed..Thanks to you”, Khan said. In professional wrestling, kayfabe pronounced ‘keɪfeɪb’ is the portrayal of staged events within the industry as “real” or “true,” specifically the portrayal of competition, rivalries, and relationships between participants as being genuine and not of a staged or pre-determined nature.[contentblock id=2 img=adsense.png]

Taking another jibe at PPP leaders, he said, “Look at the father (Zardari) and the son (Bilawal). The former has got nothing else to do other than count his coveted coins, while the latter never gets tired of touring the world.” He went as far as saying that PPP was trying to sell Bhutto’s blood. On Indian border security forces’ repeated violations of ceasefire across the international border or the Line of Control (LoC) between both the nuclear-armed states, Khan said that Indian prime minister Narendra Modi should understand that he couldn’t scare Pakistan like villains do in Punjabi films.

“I will meet and convince Modi in person to restore the long-denied rights of Kashmiris”, said Khan adding that India after invading Kashmir with 700,000-strong force drew indiscriminate hatred that is proliferating with every passing day. The PTI chairman said that he wanted India to compete with Pakistan in a ‘poverty alleviation contest’. “I want the poor in both the countries to benefit from the dividends of durable peace and subsequent progress”, said he. -saama