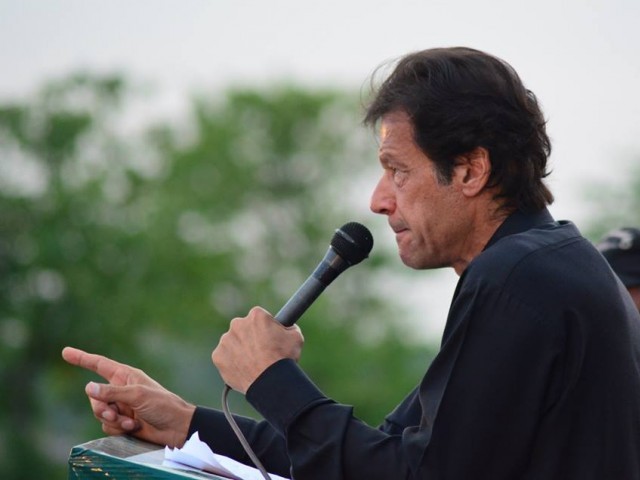 Pakistan Tehreek-i-Insaf (PTI) chief Imran Khan once again asked the Supreme Court on Wednesday to intervene in his case against the government over rigging in the last general elections. Addressing a press conference, the PTI chief said his party was open for “Supreme Court-led, but time-bound investigations into the results of general elections”.

Accompanied by Jamaat-i-Islami (JI) Emir Sirajul Haq, the PTI leader said: “One way of resolving the current crisis is that the SC conducts a free and fair audit of the last general elections as his party continues their sit-in.” But he reiterated that the PTI believed that an impartial inquiry could not be carried out, nor the guilty parties punished, as long as the prime minister remained in power. “I have given the JI emir my suggestions regarding an SC-supervised investigation,” Mr Khan said without elaborating what those suggestions were. He also did not clarify whether he had backed-off from his demand for Prime Minister Nawaz Sharif’s resignation before a judicial commission is set up to investigate the previous elections.

While the PTI leader did not take any questions after his press talk, he repeatedly underlined that he did not accept the current National Assembly or prime minister as having been genuinely elected. Elaborating on his party leader’s words, PTI MNA Dr Arif Alvi said that by asking for a SC-monitored examination of the previous elections, the PTI was offering a way out of the lingering impasse. “But this does not mean that we have backed down from our original demand for the PM’s resignation because we feel that the government will not allow a neutral investigation in his presence,” he said.

The apex court only recently struck down a petition filed by PTI leader Ishaq Khakwani, asking for the 2013 general elections to be declared null and void because nearly all parliamentary parties had admitted that there were irregularities in the process. On August 13 this year, the PM had written to the SC asking to set up a three-member judicial commission to “probe allegations which the PTI levelled against former Supreme Court chief justice Iftikhar Mohammad Chaudhry, caretaker Punjab Chief Minister Najam Sethi and a number of Election Commission officials.” -dawn