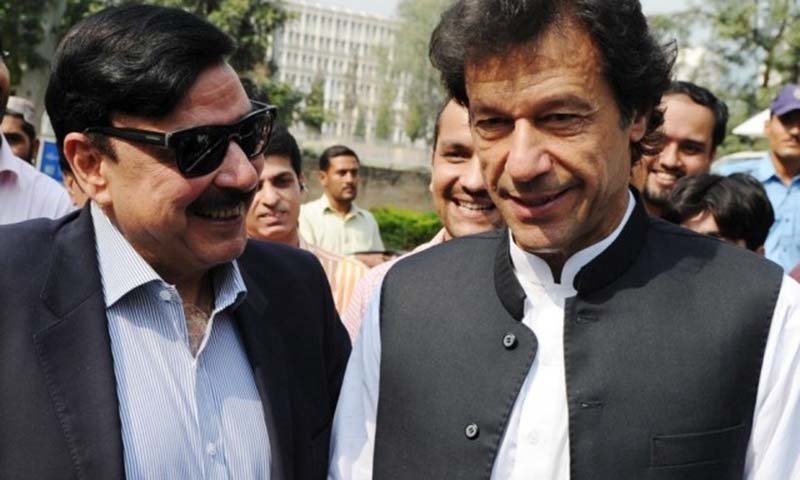 At least 500 PTI activists have also been named in the case registered by Saman­abad on a complaint of Mr Sanaullah. Cases have also been registered by Factory Area and D-Type Colony police against another 500 PTI workers for obstructing the police force in performing their duty, hampering people’s movement and causing injuries to people. They have been booked under Section 7 of the Anti-Terrorism Act and sections 148, 149, 186, 324, 341, 353 and 427 of the PPC.

In his complaint, Rana Sanaullah has accused the PTI of giving a call for a strike in Faisalabad to create anarchy and instability and halting the country’s progress. He claimed that before leaving Islamabad, Imran Khan, Shah Mehmood Qureshi, Sheikh Rashid and Asad Umer had said they would attack and besiege “my house upon reaching Faisalabad”. They had asked their supporters to attack his house, he said, adding that a similar directive had been issued by Arif Alvi at a press conference.

The former minister claimed that 400 to 500 people, led by Awais, Rasim Yaqoob, Yunus Jutt, Farrukh Habib, Mian Waris, Atiq, Shahabudin, Anwar Ramay, Aamir, Munawar Manj, Javed Niaz, Sheikh Shahid, Tufail, Younas Kamboh and Haji Riaz, had tried to attack his house but did not succeed because of the presence of PML-N workers and police there. Talking to Dawn, he said police had made his statement part of the case and nominated the people he had mentioned in his application. Meanwhile, the PTI has rejected the fact-finding committee constituted by the Punjab government and refused to join its proceedings. The three-member committee comprising the provincial environment secretary, Toba Tek Singh DPO Dr Shehzad and Additional Commissioner Kazim Awan recorded the statements of Faisalabad DCO Noorul Ameen Mengal and policemen at the Commissioner Office. Violent clashes between workers of the PTI and PML-N in different areas of Faisalabad on Monday left PTI activist Haq Nawaz dead and at least 17 people, including policemen, injured.

Farrukh Habib, central president of the Insaf Students Federation, said the fact-finding committee had summoned some PTI party leaders but they refused to attend its proceedings. Meanwhile, PTI’s Punjab President Ijaz Chaudhry demanded the arrest of Minister of State for Water and Power Abid Sher Ali, Rana Sanaullah and the DCO on charges of killing the PTI worker and letting armed people attack activists of his party. Talking to reporters at Zila Council Chowk, where he and his supporters had joined a protest by polio workers, Ijaz Chaudhry accused PML-N activists of opening fire on what he called peaceful protesters and said that instead of taking action against the criminals, cases had been registered against leaders and workers of his party. -dawn