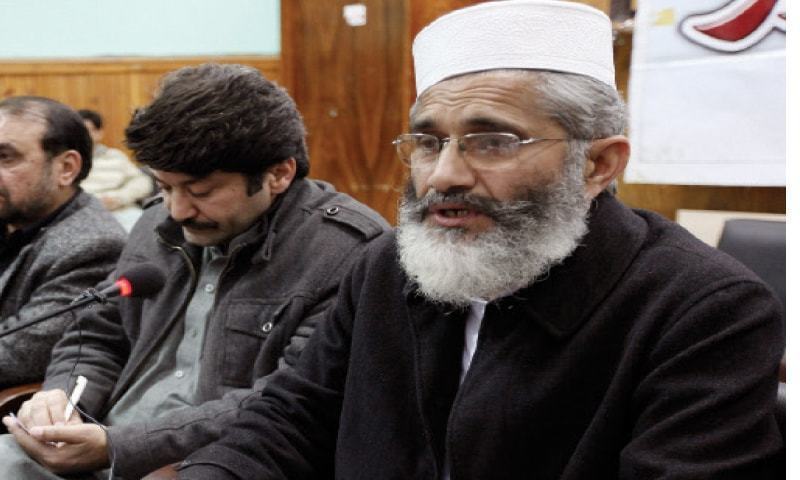 Jamaat-i-Islami emir and Senator-elect Sirajul Haq has appealed to the leadership of both the PML-N and the PPP to put forth unanimous candidates to the offices of Senate chairman and deputy chairman so as to create an atmosphere of reconciliation and to end the political crisis in the country. A consultative meeting of the JI chaired by Mr Haq here on Monday was of the view that the election to the Senate chairman and deputy chairman should facilitate the resolution of the political crisis lingering on in the country. The JI chief also stressed upon the leadership of major parliamentary parties to evolve consensus on the Judicial Commission so that the Tehreek-i-Insaf could return to the parliament. Meanwhile, PML-Functional president and Pir of Pagaro Sibghatullah Rashidi called on Sirajul Haq at the JI headquarters here. He was accompanied by Pir Sadruddin Rashidi and Muhammad Ali Durrani. JI secretary-general Liaqat Baloch, deputy chief Hafiz Idrees, and Khyber Pakhtunkhwa chapter chief Prof Muhammad Ibrahim were also present. Talking to the media after the meeting, the PML-F chief regretted that most of the politicians talked of their own parties but nobody talked of strengthening the federation.

Some politicians had formed their own groups within their parties, he lamented. He said it was high time that the politicians rose above their party considerations and seriously thought of pulling the country out of the crisis it was in and solving the people’s problems. Referring to the political situation of Sindh, he alleged all the state institutions there had been ruined and none could function independently. If the situation was not brought under control, he warned, the country could face a storm. The Pir also suggested that the PPP and the PML-N should elect the offices of the Senate chairman and deputy chairman through mutual understanding. Mr Haq said the JI and the PML-F had common viewpoint in important political issues and both wanted supremacy of the Constitution, rule of law and a strong federation.