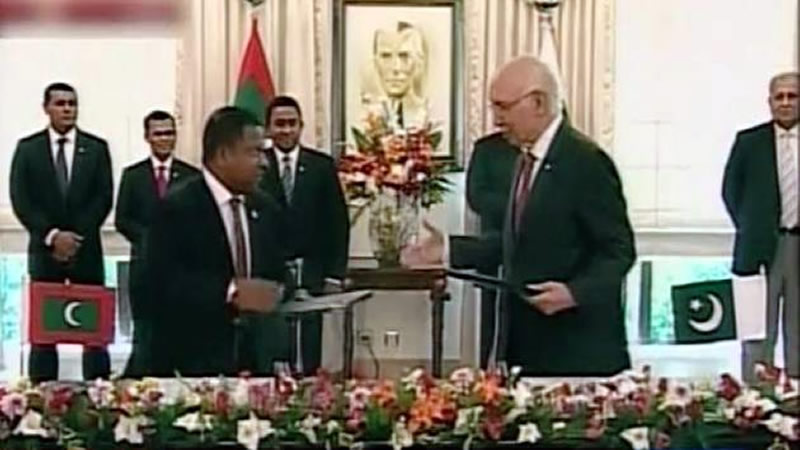 Addressing a press conference after the meeting, President Abdullah Yamin said that relations between Pakistan and Maldives have spanned for more than 49 years during which Pakistan had proven itself as a sincere friend. He thanked Prime Minister Nawaz Sharif and the people of Pakistan for according him a warm welcome. PM Nawaz said that Pakistan attaches immense importance to its relations with Maldives and added that, “Our relations are characterised by cordiality, mutual respect and commonality of interest.” He regarded the visit of President Gayoom as an important milestone in the bilateral relations between the two countries. The premier said Pakistan is aware of Maldives’ concerns on climate and environmental issues and is willing to cooperate on these issues bilaterally with Maldives as well as under the ambit of South Asian Association for Regional Cooperation (Saarc).

The premier said both Pakistan and Maldives must continue to closely coordinate their positions on the platform of Saarc with an aim to make it a model of regional cooperation, based on the principles of sovereign equality. PM Nawaz said bilateral trade between Pakistan and Maldives is below the true potential and emphasised that steps should be taken to increase it. Gayoom said the Parliament building of Maldives, ‘The People’s Majlis’ is a living monument of friendship between the people of Pakistan and Maldives. Pakistan had built the Parliament building as a gift to Maldives. The premier fondly recalled his visit to Maldives in 1996 for the inauguration of the Parliament building. The two countries also signed four MoUs relating to Sports, Health, Education, and Narcotics, which would help in further consolidating bilateral relations.

A one-on-one meeting between the Maldivian president and PM Nawaz was followed by a delegation level meeting during which a whole range of matters of mutual interest and bilateral cooperation came under discussion including tourism, trade, investment, counter terrorism, human resource training, defence as well as regional situation. Earlier on his arrival at Prime Minister House, the Maldivian president was accorded a warm reception. He was received by Prime Minister Nawaz Sharif after a contingent of armed forces presented him a guard of honour.

Bird Flu Thought to Spread Between Farms in US