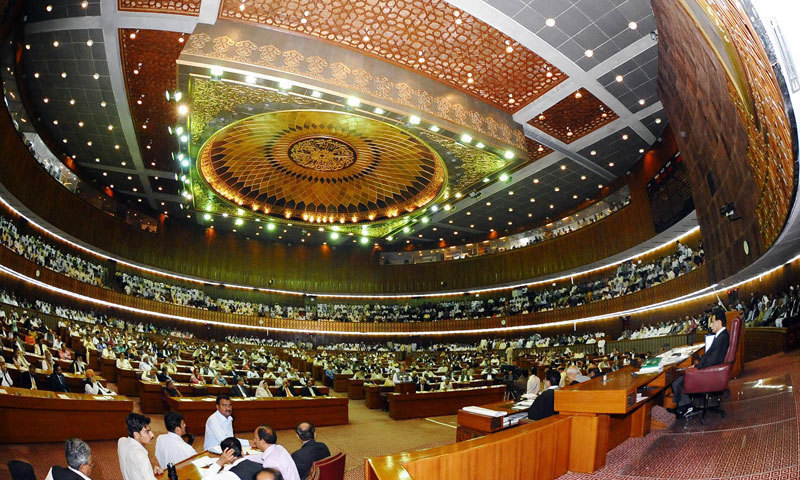 The Senate passed the controversial Rs145 billion gas tax bill on Wednesday amid fiery speeches and walkouts by the opposition, minus People’s Party.

Opposition members rejected the Gas Infrastructure Development Cess (GIDC) Bill, 2015, which was adopted by the National Assembly on Tuesday, and alleged that the government had imposed the tax only to benefit Punjab. The senators belonging to the Muttahida Qaumi Movement (MQM), Awami National Party (ANP), Pakistan Tehreek-i-Insaf (PTI), Pakistan Muslim League-Q (PML-Q) and Balochistan National Party-Awami (BNP-A) staged a walkout when Chairman Raza Rabbani put the bill for voice vote. The house, however, on the demand of opposition members agreed to form a committee to monitor implementation of the GIDC Act and make recommendations to remove anomalies, if any, from it. The debate exposed the lack of trust in Punjab by the three smaller provinces as members went so far in their opposition to the bill as to declare it a “threat to the national unity”. The harshest speeches were delivered by the senators from nationalist parties from Balochistan – the Pakhtunkhwa Milli Awami Party (PkMAP) and National Party (NP), though they later voted in support of the bill. The two parties are sitting on the treasury benches. “This (bill) will prove to be the last drone attack on the subjugated provinces. We condemn this and oppose it,” said Sardar Azam Khan Musakhel of the PkMAP. “All members from Balochistan, Sindh and Khyber Pakhtunkhwa should reject the bill. What face will we show to our people?” said Dr Ashok Kumar of the NP. NP chief Hasil Bizenjo asked the government to promise that all areas of Balochistan, particularly the district headquarters, would be provided gas after its import from Iran and other countries.

PML-Q’s Rubina Irfan asked Punjab to have a big heart if it claims to be the elder brother of other provinces. “I strongly condemn this bill. It is a disparity,” she said, adding that she was a daughter of Balochistan and did not require a “certificate of patriotism” from anyone. “Our conscience will die if we will vote for this bill,” she said, while criticising the government for getting the bill passed from the two houses of the parliament within two days. MQM’s Tahir Mashhadi termed the bill “unconstitutional” and a violation of earlier decisions of high courts and the Supreme Court. Through the bill, he alleged, the interests of the provinces were being neglected. He said that the three smaller provinces were self-sufficient in gas production and, therefore, imposition of this tax in the name of developing infrastructure was unjustified. PTI’s parliamentary leader Nauman Wazir said that only Punjab was facing gas shortage. He said that his party considered the bill against the interest of KP and it could not support it. In his apparent reference to the East Pakistan tragedy, another PTI senator Mohsin Aziz said they had already lost a brother and this bill would have “dangerous consequences” in the coming days. Barrister Saif of the MQM said that Punjab produced only four per cent of the gas whereas it used 64 per cent of the commodity produced in the country. He suggested that the constitution should be amended to declare “Punjab as Pakistan”.

Naseema Ehsan of the BNP-A was of the opinion that the bill would fuel anti-Punjab sentiments among the smaller provinces. Opposition Leader Aitzaz Ahsan said the PML-N government was responsible for anti-Punjab sentiments prevailing in the smaller provinces. “Your government is bringing a bad name to the Punjab province.” He regretted that all the key ministries such as finance, interior, commerce, water and power, defence, petroleum and natural resources, law and justice and railways were at present being held by legislators from Punjab, making it a Punjab-based government. The PPP leader said the speeches delivered by members from smaller provinces should serve as an eye-opener for the government. He, however, defended his party’s decision to support the bill, saying that it was first introduced by the PPP government in 2011. Winding up the debate, Minister for Petroleum and Natural Resources Shahid Khaqan Abbasi dispelled a perception that the bill was being tabled only to provide benefit to Punjab. He said the tax was being imposed as the government required Rs1,000bn annually to maintain and improve gas infrastructure in the country. The minister assured the house that the tax would not be misused and parliament would oversee it. The government had prepared a plan to provide gas to every district headquarters of Balochistan by the end of its five-year term, he added.