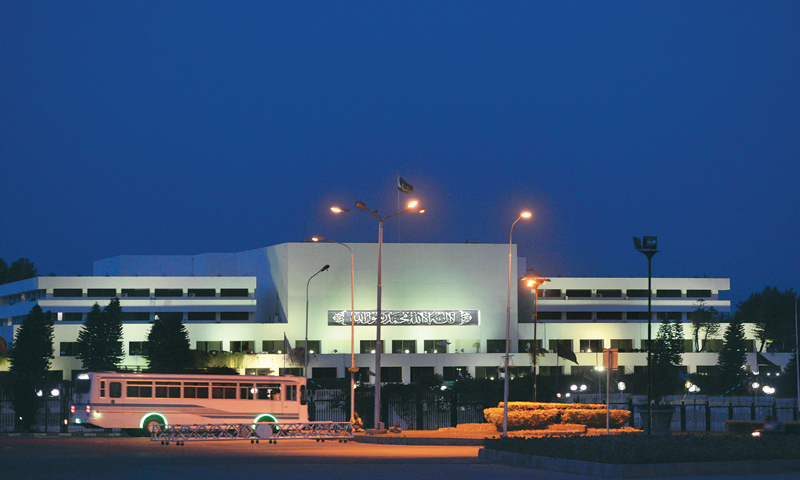 Former president Asif Ali Zardari’s speech was the main topic of discussion in both houses of parliament on Wednesday.

But contrary to the advice of the ruling PML-N or even fellow opposition members from the PTI, PPP legislators seemed to put their weight behind their leader as they continued to assail the military leadership and warned them against targeting the party.

The PPP lawmakers in the National Assembly, one after the other, hit out at the military’s top brass for “violating their constitutional duty”. On one occasion, a lawmaker went so far in his remarks that the speaker had to expunge them from the parliamentary record. Former PPP health minister Aijaz Hussain Jakhrani, in a hard-hitting speech, talked about what he termed “the army’s unwanted interference in the affairs of PPP-ruled Sindh”. “Following the approval of the National Action Plan, apex committees have been constituted in all four provinces, but the one in Sindh seems to be very active. Can anybody explain why this is?”  He went on to say that it appeared that the law and order situation in the other three provinces was perfectly fine. He also criticised the Sindh Rangers for accusing the provincial government of patronising people with ‘black money’. “This is too much, it has to stop somewhere,” he said. Recalling an episode from last week where Sindh Rangers had a face-off with Momin aabad police, Mr Jakhrani asked who had given the Rangers the right to operate of their own free will.

He warned ruling party’s lawmakers that if the PPP was being targeted by the powers-that-be today, it may be their turn tomorrow. “Mark my words, once democracy is derailed, then there will be no elections in the near future.” PPP’s Shazia Marri was also quite direct in her speech, saying, “Whatever Mr Zardari said on Tuesday were the true reflections of a brave politician. He only talked about the ground realities. Did he say something wrong,” she asked. Referring to the sayings of Quaid-i-Azam Mohammad Ali Jinnah, Ms Marri said that both the civil and military bureaucracy were servants of the people and had no role to play in the affairs of the government.

Before the PPP diatribe, PML-N’s Rana Mohammad Afzal demanded that the former president withdraw his statements against the army as an institution. PTI’s Sarwar Khan, however, was the one who not only asked the former president to take his words back, but also took him to task for ‘stooping too low’. “If I consider recent statements made by Indian Prime Minister (Narendra) Modi and former president Zardari, I don’t see any difference,” he said, adding that at a time when the army was making the ultimate sacrifice, “I am unable to understand to what prompted Mr Zardari to make such caustic remarks.”

The MQM, meanwhile, boycotted the proceedings of the budget session and announced that the party would continue to do so until an unconditional apology is offered by Defence Minister Khawaja Asif. During the proceedings on Monday, Mr Asif had said that the MQM was only opposing the extension in the ordinance for changes in the army act out of fear that it would expose their own misdeeds. Senator Farhatullah Babar, who is also spokesperson for the PPP, led the charge in the upper house. “A plan seems afoot to dislodge the provincial government and let the apex committee and Rangers take over its functions,” he said while speaking on a calling-attention notice regarding the revelations made recently by the director general of Sindh Rangers. He said Rangers’ raid on the Karachi Building Control Authority and other offices on Monday amounted to them taking over the functions of the provincial government and questioned the motives of the paramilitary force in this ‘overzealous but illegal’ drive. Mr Babar said the Rangers had been requisitioned in Karachi under Article 147 of the Constitution and under Section 4 of the Anti-Terrorism Act specifically to prevent terrorist acts and other scheduled offences. “Issues of corruption and governance must be addressed resolutely without fear or favour through legal institutions such as the National Accountability Bureau (NAB) and the Public Accounts Committee (PAC), anti-corruption departments and courts, not by resorting to illegalities,” he remarked.