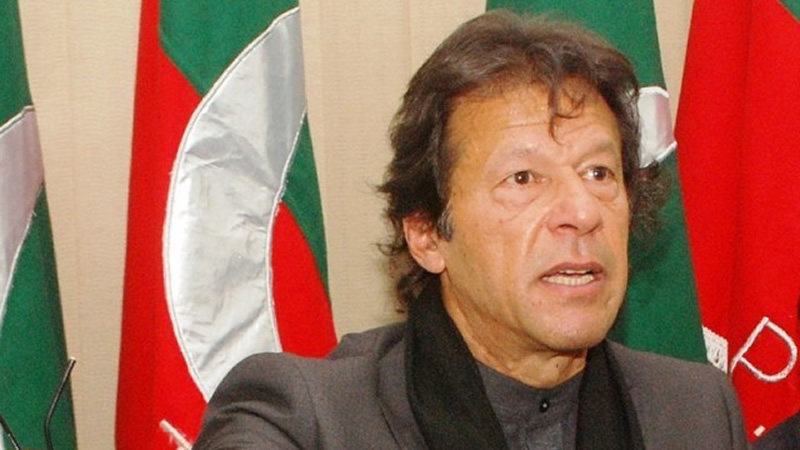 Pakistan Tehreek-i-Insaf Chairman Imran Khan has said that he would never tolerate a division within his party. A fully worked-up Mr Khan delivered a marathon three-hour pep talk to his party leaders gathered here on Sunday.

Dressed in his favourite black shalwar-kameez, he warned his party’s central and provincial leaders that their continued wrangling would benefit only the adversaries.

Journalists were kept out of the event, but PTI’s Twitter account contained snippets from Mr Khan’s speech. And PTI spokesperson Dr Shireen Mazari released main points of the speech. Mr Khan was the only speaker on the occasion but before his speech a documentary was shown to the participants. Following the release of the poll inquiry commission report, senior PTI leaders Hamid Khan and retired Justice Wajihuddin Ahmad have been criticising party’s General Secretary Jahangir Tareen for having failed to effectively present the case before the commission. Mr Hamid Khan even said that Imran Khan was surrounded by opportunists, remnants of General Musharraf and power grabbers, while Justice Ahmad, based on findings of the PTI’s election tribunal which he headed, has been pressing for terminating Mr Tareen’s basic membership.  According to a senior party leader and close aide to the PTI chairman, Sunday’s meeting was meant to give a clear warning to all tiers of the leadership against continuous finger-pointing within the party. “No political party can afford to let the washing of its dirty linen in public and that too at this scale.”

Putting up a stout defence of Mr Tareen, according to one participant, the chairman spent a considerable time to clarify his own position. “A leader chooses his advisers and his team. There is no seniority in a team. There is merit in the team selection. All those close to me know that I will never make concessions because they are close to me. So those who say I chose Mr Tareen because he owns a plane are wrong. Ten years ago I was informed of his organisational skills and I invited him to join.” He said Mr Tareen’s appointment as secretary general of the party in place of Pervez Khattak who had been elected as chief minister of Khyber Pakhtunkhwa was made after consultations with Shah Mehmood Qureshi and Asad Umar. Despite his serious illness, Mr Tareen put up a brave show during dharna days.

Mr Khan told his party’s leaders who were accusing him of accepting politicians from left, right and centre that “no-one should tell me who is a true nazariati. I can count on my fingertips people who stood by me in those days. Nazaria is always tested in a crisis. So I know who has been a nazariati over the past two to three years. So let those faces covered who now say they are nazariati and the new people joining the party are not”.

A text of remarks made by Mr Khan released by Dr Mazari on Twitter quoted him as saying: “No qabza group has hijacked IK; people will come ahead in PTI on capabilities and on merit. There was a hype on social media that Imran Khan is not taking decisions; someone is writing a script. But I am not PML-N or PPP.” In his speech, the PTI chairman recalled the highs and lows which the PTI had witnessed since its inception in 1996. Again offering his unconditional apology for supporting General Musharraf in his referendum, Mr Khan argued that the decision was taken after a detailed discussion in the party. “This was a major embarrassment to me and I apologised to the nation.” He claimed to have repeatedly rejected offers from the forces of status quo to join hands with them. Reiterating his policy of going by the merit, he said over the next few days he would meet Tasneem Noorani, the election commissioner for intra-party elections. He asked PTI leaders to prepare for the coming local government elections in Punjab and Sindh and said he had been disappointed by reports of nepotism in distribution of tickets for the LG elections in KP. He admitted that the distribution of tickets during the 2013 general elections was faulty and said he would personally oversee the process in future.