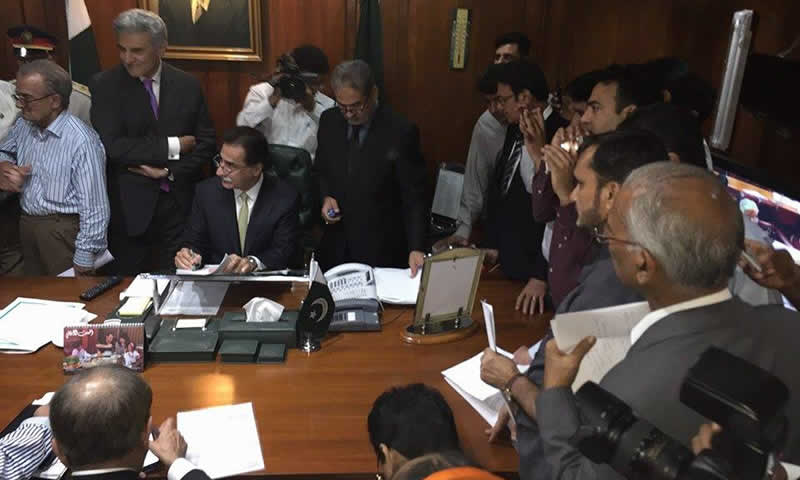 The MQM, which has a unique record of quitting governments and assemblies and boycotting elections, has for the first time resigned from the Senate.

Senator Nasreen Jalil, who is among the eight senators who submitted their resignations on Wednesday, said the party had resigned from the National Assembly as well as the Sindh Assembly in 1992 as a mark of protest against the military operation in Karachi.

Two MQM senators — Ishtiaq Azhar and Master Ali Haider — had not been asked by the leadership to resign. Ms Jalil, who became senator for the first time on a general seat in 1994 with her other party colleagues Aftab Sheikh and Ishtiaq Azhar, said she could not recall as to why the MQM senators were asked by the leadership at that time to continue to work. Dr Farooq Sattar said perhaps at that time the party elders had a belief that they should not come out of the Senate because it was a symbol of federation. But this time, he said, the leadership was of the view that the human rights issue was bigger than any other consideration and that the party should quit the whole system as a mark of protest. Moreover, he said, there was no use of sitting in the assemblies where every political party was silent over human rights violations. “We have come out of the whole system after seeing silence of other parties in parliament on the issue of human rights violations taking place in Karachi,” he said.

Interestingly, the Senate record available on its official website has no mention of any MQM member in the upper house between 1991 and 1994. The MQM, which was founded in 1984 by Altaf Hussain, is the second largest party in the Sindh Assembly and the fourth largest in the National Assembly after the PML-N, PPP and Pakistan Tehreek-i-Insaf. The MQM had been a part of the ruling coalition at the centre and in Sindh for a larger period of time from 1988 to 2014. The party had the credit of sitting in governments with all major political parties — PPP, PML-N and PML-Q. During the previous PPP-led government, the MQM on a number of occasions threatened to quit the ruling coalition and on one occasion it even came out of the government, but rejoined it after getting assurances from the then president Asif Zardari. Besides resignations, the party also has a matchless track record of boycotting elections. The MQM had proved its existence for the first time by winning a significant number of seats in the local government elections in Sindh three years after its creation in 1987.