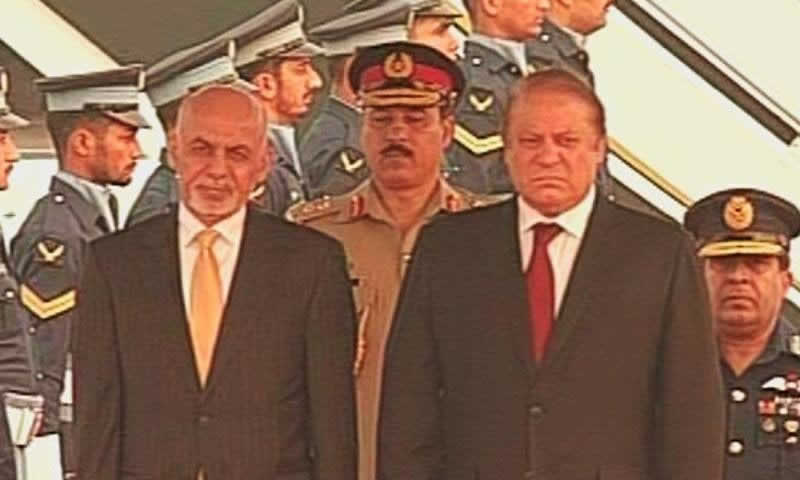 Afghan President Ashraf Ghani arrived in the federal capital on Wednesday to attend the fifth ‘Heart of Asia ─ Istanbul process’ ministerial conference.  Ghani was received by Prime Minister Nawaz Sharif at Nur Khan air base and presented a guard of honour and given a 21 gun salute.

National anthems of both countries were played. High-level officials of the civil leadership and armed forces present at the reception included Chief of Army Staff General Raheel Sharif,

Swaraj arrived in Islamabad on Tuesday and was received by Foreign Office officials. The ministerial session today will be jointly inaugurated by PM Nawaz and the Afghan president.  During the opening session of the conference on Tuesday, Adviser to the Prime Minister on Foreign Affairs Sartaj Aziz and Afghan Deputy Foreign Minister Hekmat Khalil Karzai laid emphasis on regional cooperation for defeating terrorism. “In our view, closer regional cooperation can play an effective role in eliminating the scourge of terrorism,” Aziz said.

Khalil Karzai called for united action against militancy in the region saying, “We strongly believe that today, like never before, regional and international circumstances require a united and collective approach in the fight against the scourge of terrorism and extremism.” Tensions between Pakistan and Afghanistan were reflected during the inaugural session as Karzai, without naming Pakistan, called for an end to support for Taliban.

“Vision of a peaceful, stable and prosperous Afghanistan, which is in the best interest of the region, is far from becoming reality unless we put an end to financial, logistical and ideological support enjoyed by militants in our region,” he said. In the past, Afghan officials have openly accused Pakistan of backing Taliban insurgents. Afghan President Ashraf Ghani has on a number of occasions pointed fingers at Pakistan for not ending Taliban sanctuaries on its soil.