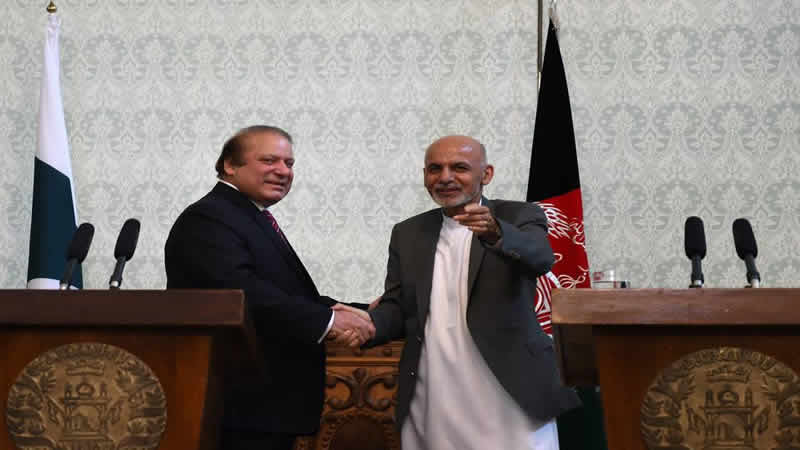 Pakistan and Afghanistan agreed on Sunday to take first formal steps towards the resumption of reconciliation talks between the Afghan government and Taliban by convening a meeting in the first week of next month under the recently formed ‘quadrilateral framework’ that also involves China and the United States.

The venue and the level of representation will be decided by the four countries. According to one source, there will be a series of quadrilateral meetings in January, leading to resumption of the reconciliation process that was suspended on July 30 after it became public that Taliban leader Mullah Omar had been dead for over two years. The decision about the next steps towards revival of the peace talks was taken during Chief of Army Staff Gen Raheel Sharif’s long-awaited visit to Kabul for discussions on the reconciliation process, border management and other security matters. During his daylong trip, Gen Sharif met Afghan President Ashraf Ghani, Chief Executive Dr Abdullah Abdullah and the US and Nato commander in Afghanistan, Gen John Campbell. “First round of quadrilateral meeting will be scheduled in January to work out a clear and comprehensive roadmap for a meaningful peace process,” military spokesman Lt Gen Asim Bajwa, who accompanied the army chief, tweeted after landing back here in the evening The quadrilateral framework was announced during President Ghani’s visit to Islamabad this month. It was also agreed that a steering committee of the framework would oversee the process.

An official here did not discount the possibility of the Afghan reconciliation talks getting under way next month. Both sides realised the urgency of reaching a political settlement that could end violence in the country, he said. “It is clear to everyone that there is a narrow window of opportunity and sincerity is required to get the warring factions on the table and take the process forward.” It was agreed during Gen Sharif’s talks with President Ghani and Chief Executive Abdullah that ‘reconcilable’ Taliban elements would be engaged, while the others would be dealt with in “a mutually agreed” manner. The official said it was a clear message to all Taliban factions to choose peace or be ready for the consequences. He said the strategy for dealing with irreconcilables was yet to be decided. A spokesman for Mr Abdullah said “options to take action against those armed groups which refuse to come to the negotiating table” were discussed during the meeting with Gen Sharif. An Inter-Services Public Relations statement emphasised that resumption of reconciliation and its success was a “shared responsibility of all stakeholders” and the coming quadrilateral meetings would clearly demarcate responsibilities of the various stakeholders at different stages of the process that would be led by the Afghan government.

“We have made it clear that Pakistan is not responsible for everything, rather all stakeholders would need to work together for ending violence,” an official said. The official, who sat in Gen Sharif’s meetings in Kabul, said the discussions were candid and there was also a lot of positivity. When asked to compare the new engagement with the process that was initiated earlier this year, the official said: “Now there was a lot more clarity and commitment than before. The army chief flagged the need for establishing a new coordination mechanism to control unauthorised movement across the long, porous border between the two countries. But, as in the past, he did not find the Afghans much receptive to the idea. The ISPR statement recognised the ‘complexities’ for such an arrangement because of the large Afghan refugee population in Pakistan and the cross-border tribal linkages. Instead of a formal coordination mechanism, the two sides settled for sternly dealing “with any elements crossing over and getting involved in violence on either side, through active intelligence sharing and intelligence-based operations”.

The two countries had agreed in May on intelligence cooperation between the Inter-Services Intelligence agency and the Afghan National Directorate of Security, but the arrangement could not take off the Afghan authorities’ aversion to it. Something concrete in this regard emerged on Sunday in the shape of a decision to set up a hotline between the directors general of military operations of the two countries and to reinvigorate military exchanges. There has been no mechanism for coordination on the border since a commission of Pakistan, Afghanistan and the coalition forces completed its mandate following the end of the International Security Assistance Force’s mission in the war-ravaged country in December last year. Border clashes have increased in the absence of the mechanism. According to a defence official, 132 border violations were committed by the Afghan forces this year in which 18 Pakistani soldiers died.