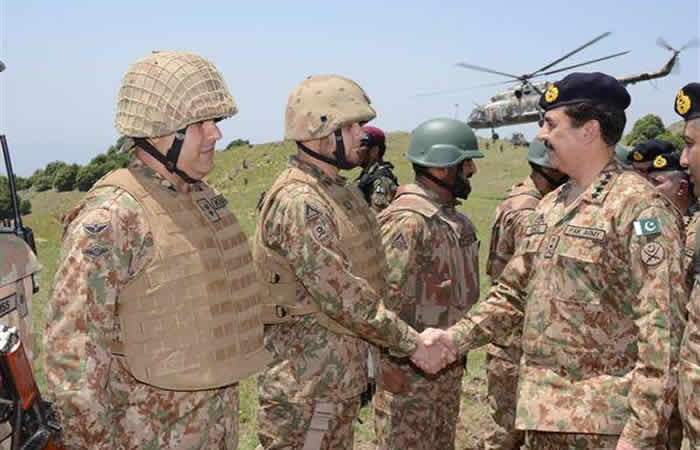 Taking notice of a “hostile narrative being propagated by India”, Chief of Army Staff (COAS) Gen Raheel Sharif during a corps commander’s conference on Monday said the Pakistan Army is “fully prepared to respond to the entire spectrum of direct and indirect threats”, according to an Inter-Services Public Relations (ISPR) statement. Presiding over the conference at General Headquarters, Gen Raheel said the Army was fully cognisant of and closely watching the latest developments in the region and their impact on national security. The Army chief also expressed satisfaction over the operational preparedness of the Army.

The conference provided an in-depth review of the external and internal security situation and operational preparedness of the armed forces, “Pakistan’s armed forces together with their resilient nation have surmounted every challenge and will thwart any sinister design against integrity and sovereignty of the country in future as well,” the COAS said. On Sunday, India’s Home Minister Rajnath Singh termed Pakistan a ‘terrorist state’ in an anti-Pakistan rant, hours after suspected militants attacked an Indian army base in India-held Kashmir (IHK).

Rajnath’s vitriol comes as Pakistan and India gear up for a showdown at the United Nations General Assembly (UNGA) session starting Monday. Pakistan is preparing to “forcefully” highlight the situation in Indian occupied Kashmir at the UN session, whereas India intends to counter Pakistan’s stance by raising the Balochistan issue, arguing that the Baloch are also seeking independence from Pakistan and deserve international support.

India is also backing Baloch activists to hold a demonstration outside the UN headquarters during the prime minister’s speech. Both Pakistan and India are trying to persuade the US to support their respective positions. The US, however, appears to have decided not to take sides. Pakistan has had to contend with incendiary remarks by Indian lawmakers with increasing frequency as both countries lock horns over the Kashmir issue.