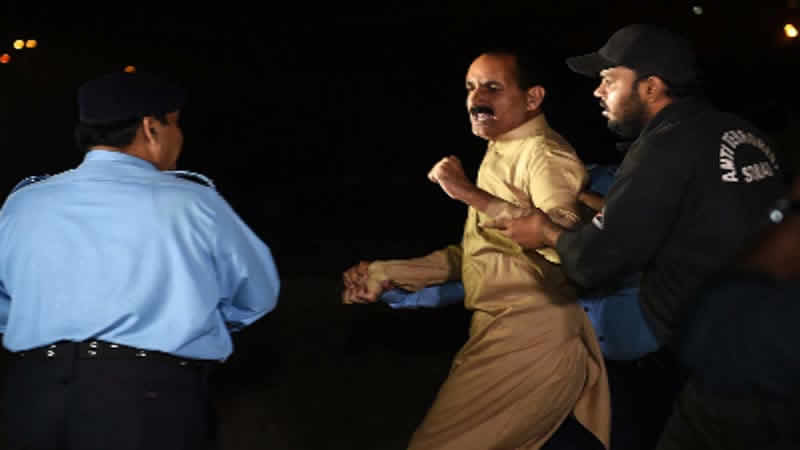 The battle between PTI and the government entered its final phase on Thursday after the police and FC stormed Pakistan Tehreek-e-Insaf’s youth convention and arrested scores of party activists.

Video footage showed that police and FC personnel baton-charging and taking away PTI workers in a bus without any fear and justification from the venue. PTI leaders Shah Mehmood Qureshi and Asad Umar were also present on the occasion.

Talking on the occasion Qureshi alleged that the government had arrested hundreds of their workers and police tortured the female workers as well. “Hundreds of PTI workers were arrested and female workers were tortured by the police,” claimed Qureshi” he added. “We are going to meet to IG Islamabad and discuss the situation.” he reiterated. Peaceful protest is our constitutional right. On whose orders did they raise their arms to attack these peaceful workers? Why are our workers being arrested?” asked Qureshi. Asad Umar said, “State injustice cannot stop us from protesting and the government is afraid of PTI’s democratic protest.” He was of the view that there is no democracy in Pakistan. The government has proved that there is no democracy in Pakistan, rather it is a monarchy,” he said. Police transferred the arrested PTI workers through police van to an undisclosed location and sealed the hall where the convention was being held. Peaceful protest is our constitutional right.

On whose orders did they raise their arms to attack these peaceful workers? Why are our workers being arrested?” asked Qureshi, who was visibly angered. He was soon accompanied by Asad Umar. “This act has proved what Supreme Court said…that there is monarchy and not a democracy in Pakistan,” Asad told reporters. I appeal to Islamabad administration. We are legislators. IG Islamabad, commissioner Islamabad, tell us on whose orders this action was carried out?” he said. The two leaders soon announced that they were going to speak to the inspector general Islamabad and demand an explanation from him. On the other hand, another PTI leader Shireen Mazari in her tweet said that the PML-N has decided to use violence against the PTI so now they must stand firm against the PML-N’s fascism.

The PTI has given a call for a massive protest in Islamabad on November 2, in a showdown aimed at forcing Prime Minister Nawaz Sharif to step down and present himself for accountability in the wake of Panama Papers disclosures. Later, PTI Chairman Imran Khan gave a call for countrywide protests against the police brutality. Addressing a press conference following the arrests of his workers, Kaptaan said the planned sit-in on November 2 was planned to be peaceful. We told the government that we would remain peaceful if they had remained peaceful. Now the movement will take a different direction,” said the PTI chairman. He reiterated the call for countrywide protests on Friday and said the police can arrest him if they want “under Section 144”.

Imran also questioned the current democratic system in the country and said, “What kind of a democracy is in Pakistan when we are jailed for practicing our democratic right.” Following the PTI chief’s press conference, PTI workers took to the streets in different cities of the country and held sit-ins at major thoroughfares. Cities where PTI workers were staging sit-ins are Karachi, Multan, Peshawar and other major cities. PTI chairman Imran Khan has announced countrywide protests on Friday (today) against state aggression, a private TV channel reported. He announced this during an emergency meeting in Bani Gala which was attended by senior party leaders. – dailytimes