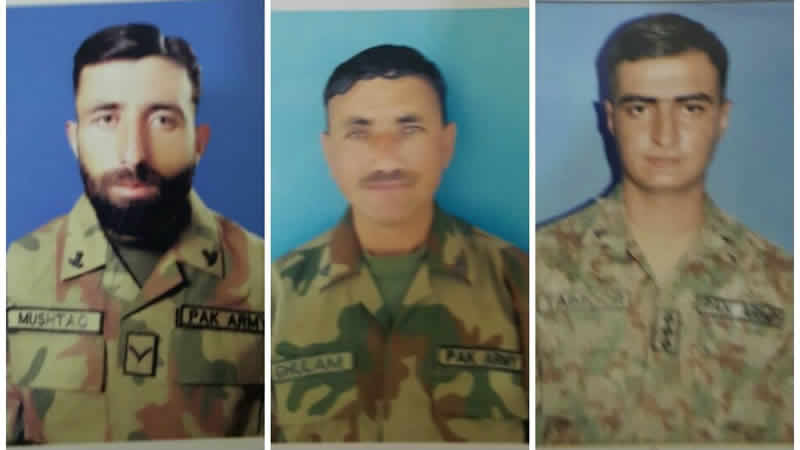 Three Pakistani soldiers embraced martyrdom in firing by Indian security forces along the Line of Control (LoC), shortly after nine civilians fell prey to the gunfire by Indian troops.

Indian border security forces targeted an ambulance carrying victims to a hospital which resulted in death of nine civilians.

According to Inter Services Public Relations (ISPR), Pak soldiers befittingly responded to Indian firing and inflicted damage on forces demonstrating aggression from across the border. Firing was also reported in Dara Sher Khan Sector of the control line targeting the civilian population on the Pakistani side of the informal border. Pakistani forces gave a befitting response to the Indian forces and silenced their guns. Several Indian checkposts were destroyed and casualties were reported in the retaliatory firing. Fear and tension gripped the area following the incident of firing.

All educational institutions in the area have been closed due to security reasons. It should be noted that Pakistani forces killed six Indian soldiers in retaliation to unprovoked firing by Indian border forces along the LoC on Monday. As tension escalated along the border region recently, cross-border exchanges of fire between the troops of the nuclear-armed rivals frequently occurred. Pakistan has repeatedly told India to refrain from creating tense circumstances along the border. Relations between the two countries have plummeted in recent months, with India blaming militants from Pakistan for a raid on an army base in its part of disputed Kashmir in September that killed 19 soldiers.

The Director General (SA & SAARC), Dr. Mohammad Faisal, summoned the Indian Deputy High Commissioner, Mr. J.P. Singh today and strongly condemned the unprovoked ceasefire violations. He stated that the deliberate targeting of civilian populated areas, villages, the ambulances and the civilian transport is deplorable and below human dignity. The Director General further deplored the belligerent targeting of the ambulance which was rescuing the affectees of the attack on the bus, as a blatant violation of International Humanitarian Law. The Director General urged the Indian side to respect the 2003 Ceasefire Understanding; investigate the continued incidents of ceasefire violations; instruct the Indian forces to respect the ceasefire, in letter and spirit, stop targeting the villages and civilians and maintain peace on the LoC.