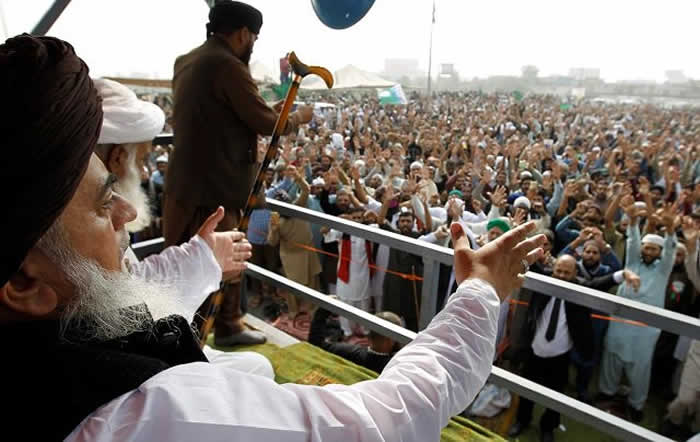 The government finally caved in to the demands of protesting religious parties after a failed operation to evict them from Faizabad Interchange as Law Minister Zahid Hamid, who is at the center of the controversy, tendered his resignation. The minister’s resignation was the key demand of the protesting Tahreek Labaik Ya Rasool Allah camped out at the capital’s main artery for more than 20 days.

The federal government has reached an agreement with the protest leaders and the minister’s resignation is said to be  part of it. The agreement comes on the heels of a botched police action against the protesters that left five people dead and over 150 injured, paralyzing major cities of the country. Zahid Hamid offered the resignation to steer the country out of the prevailing critical situation, a Radio Pakistan report said. The protest leaders are expected to announce end to the sit-in at a press conference shortly as their chief demand has been accepted. “Our main demand has been accepted,” Ejaz Ashrafi, spokesman of the Tahreek-e-Labaik group said. A day earlier, the civil and military leadership had decided to engage the protesters in political negotiations, avoiding use of any force to disperse them.

The military leadership, during a high-level meeting chaired by Prime Minister Shahid Khaqan Abbasi at PM House in Islamabad, called for a peaceful solution of the sit-in and to refrain from any use of force. Chief of Army Staff Qamar Jawed Bajwa, who reached the country on Saturday night after curtailing his visit to UAE attended the meeting. Director-General Inter-Services Intelligence (ISI) Naveed Mukhtar, Interior Minister Ahsan Iqbal and Punjab Chief Minister Shehbaz Sharif were also present during the meeting. The army chief  reportedly suggested that the use of force should not be used against the protesters, as the support for the army is valuable asset and will not be used for petty gains. Gen Bajwa reportedly suggested PM Abbasi to identify those responsible for the amendment in the law, which ignited the chaos that has engulfed the nation.

US will Act if Pakistan Does Not Destroy Safe Havens: CIA

US will Act if Pakistan Does Not Destroy Safe Havens: CIA