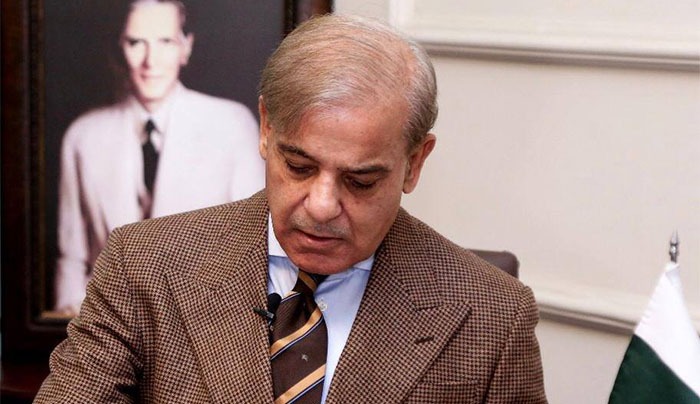 Following a week of continuous ruckus in the National Assembly (NA), the Leader of the Opposition in the NA and Pakistan Muslim League-Nawaz (PML-N) president Shehbaz Sharif on Wednesday finally got an opportunity of delivering an uninterrupted speech – as the government and the opposition appear to have agreed to not interrupt the debate on the upcoming federal budget 2019-20.

As the session of the NA resumed for a general discussion, Shehbaz warned the government that if modification in the proposed budget was not made, then the opposition parties would not allow the government to function.

Importantly, he demanded the government to reverse the prices of gas and electricity as of May 31, 2018.

“In this house, the charter of democracy was inked, and it is our desire that a charter of economy is also signed in the house… it is a first opportunity as the poor people have been protesting,” he said, while recalling PTI leaders claims on containers [during the 2014 sit-in] and comparing those with what he called the downfall of industries, and the economy and the increasing unemployment in the country today.

“The US dollar has spiked to Rs157, and by the time my speech is over, it could even reach Rs160…I want to inform how time [of the general public] has been wasted,” he said.

While expressing regret over “wasting days”, the opposition leader said: “The uproar in the last four days was against the traditions of this house, it does not add to its glory. This lays a heavy responsibility on the shoulders of the speaker. Even yesterday, request for the issuance of the production orders was made for members of the parliament who are absent for the proceedings of the house.”

He said that the menace of electricity load-shedding had been in place since [former president] Musharraf’s regime.

“Musharraf had claimed of laying a foundation stone of the Bhasha Dam by placing some machinery nearby the project site, but not even a dime was allocated for the project,” he said, adding that previously [prior to PML-N’s tenure], there had been a 20-hour load-shedding, and his remarks of eradicating the power outages within six months was quoted out of context.

“The PTI had created a chaotic environment in the country to make us fail, and efforts were made to cripple the state’s economy,” he said.

“The cancellation of tour of the Chinese president [at that time] was hostility of the PTI towards the country,” he said.

“The tour of the Chinese president that was scheduled for the year 2014, then happened in 2015, and subsequently China jointly with Nawaz Sharif commenced the project of the CPEC,” he added.

Shahbaz Sharif said Saudi Arabia, Turkey and China are included in the list of Pakistan’s best friends, and if Pakistan does not engage China effectively, then who would trust us [as a state].

“I will not waste your time, I am not telling stories. I will not say anything that is irrelevant or not based on fact. Earlier, the PTI had claimed that China was lending money to Pakistan and not helping us out, and later Asad Umar admitted of Chinese investment in the state…If one loses trust, it cannot be restored,” he went on to say.

The opposition leader said that in the five years [of PML-N’s tenure of the government], electricity production projects of 11,000 megawatts were launched, and it was not an easy task, whereas in KP, -6 megawatts of electricity was generated.

“Several years were spent on Neelum–Jhelum [Hydropower Plant] and Kachi Canal [project], whereas Imran Niazi constituted a commission for investigation into loans taken by the government. The commission should also inquire the Neelum-Jhelum project from Musharraf’s era. During our tenure, billions of rupees were saved in the projects, and the inflation in our tenure was at 12 percent,” he said.

“When we came into power, the inflation was 12 percent and we reduced it to three percent. In five years of its tenure, the PML-N had established 40 universities as without education, a nation couldn’t prosper… The PML-N brought revolution in its tenure,” he said.

“This was the state of Pakistan at the time when the country was handed over to the ‘most rigged’ government of all times,” he stated, while asking is today’s Pakistan is better or the one a year ago?

“I am not saying that we had fixed everything in our tenure, but 15 years ago we [Pakistan] competed India in various sectors, and in certain sectors Pakistan was ahead and in others India,” he mentioned.

During his address on June 11, Prime Minister Imran Khan had said: “My mistake is I didn’t cave under pressure and give them an NRO [National Reconciliation Ordinance]. The country fell into debt because of two NROs.”

Referring to his comments, Shahbaz said that Imran Khan did not have the authority to give an NRO, while terming it a “notorious relief order”.

“I want to ask, for the last time, because Imran Khan has repeatedly spoken about refusing ‘NRO’, who asked for it? When was it asked for? And who was the witness?

“Tell the country, when and who asked him [PM Imran] for an NRO? Is there any witness? The country is very worried; Imran Khan says something but he doesn’t give any evidence.

“I am saying this for the last time on the floor of the house: please tell this country who asked for an NRO, when did they ask and who is the witness.”

Referring to the proposed budget by the government, Shehbaz said that the budget was dictated by the International Monetary Fund (IMF), and how would the government achieve the target of the set revenue [for the next year]?

“Our government had achieved the target of set revenue of Rs4,000 billion, whereas [in the proposed] revenue target of Rs5,500 billion, most of the amount is indirect taxes, and Imran Khan had said that he would take the revenue target to Rs8,000 billion. In this budget, there are 70 percent indirect taxes, and the budget was needed to have measures for reducing inflation [in the country]. In the outgoing fiscal year, the government presented two mini-budgets, and the Sindh government strongly protested over unreleased funds [to the provincial government],” he said.

“It had only brought a message of disappointment for the people. We completely reject this budget. Budget is a sword of torture that is slitting the throat of the common man,” he added.

“If they were to make a people’s budget, there were five things that were important: employment opportunities, raising gross domestic product (GDP), increasing exports and trade, further reducing prices, and providing social and economic justice.

“Those who had come to create a naya Pakistan and to turn Pakistan into heaven have taken it towards economic hell through these bad steps.”

“They will then compromise on such tough national interests which would worsen the economic and political situation of Pakistan.”