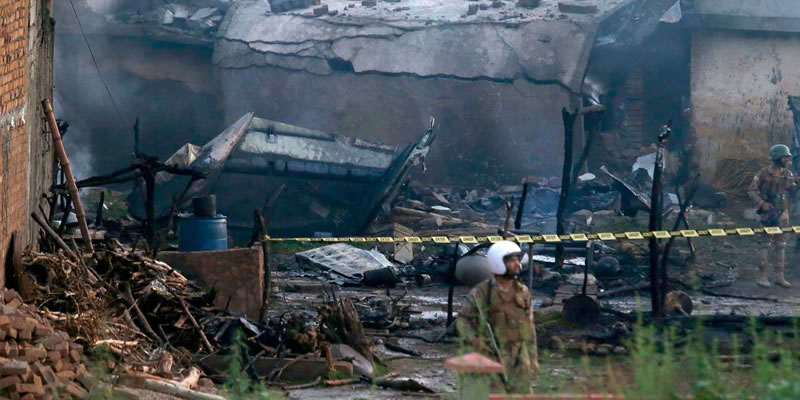 17 people, including five crew members and 12 civilians, lost their lives after a Pakistan Army aviation aircraft on a routine training flight crashed near Mora Kalu Rawalpindi.

According to an Inter-Services Public Relations (ISPR) press release issued on Tuesday, 12 others were injured in the incident.

The ISPR said that rescue teams of the Pakistan Army and Rescue 1122 had reached the site of the incident and a fire had been extinguished. All injured were shifted from the Holy Family Hospital (HFH) to the Combined Military Hospital, Rawalpindi.

Military officials cordoned off the crash site. A cleanup operation at the site of the incident has started in order to clear rubble.

Several men and women who lost their relatives in the crash were seen wailing and crying as rescuers put charred bodies of the victims into ambulances.

One resident of the area told AFP that the crash happened around 2am.

“I woke to the sound of a huge explosion. I stepped out of my house and saw huge flames and we rushed to the site,” said Mohammad Sadiq.

“People were screaming. We tried to help them but the flames were too high and the fire too intense, so we could not do anything. The dead includes seven members of one family and most of them were burned to death.”

Another resident Ghulam Khan said he heard the plane as it buzzed over his house, adding the aircraft appeared to be on fire before it crashed.

“The sound was so scary,” he added.

Prime Minister Imran expressed grief over the loss of precious lives in the incident. According to Radio Pakistan, the premier expressed commiserations with the families of the victims and prayed for the recovery of the injured.