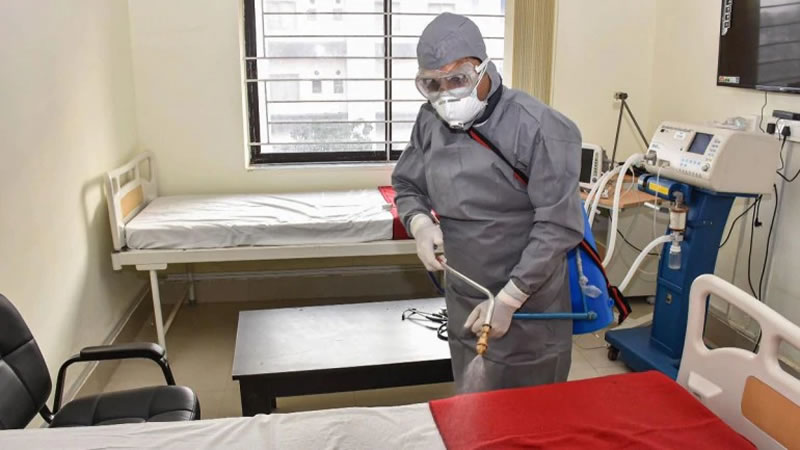 The nationwide tally of COVID-19 patients Thursday crossed 2,400, with 34 deaths reported and 107 fully recovered so far.

Punjab topped with 914 cases, followed by Sindh which has reported 761 cases so far. Some 311 confirmed cases were reported by Khyber-Pakhtunkhwa, 187 by Gilgit-Baltistan, 169 by Balochistan, 62 by Islamabad and nine by Azad Jammu and Kashmir.

An 80-year-old man, who tested positive for coronavirus, passed away in Gilgit-Baltistan on Thursday, taking the region’s death toll to three. “With the latest death, the number of casualties has risen to three,” Adviser to GB Chief Minister on Information Shams Mir confirmed during a press briefing. The deceased belonged to Astore district and had returned from Karachi recently.

Sindh Minister for Health and Population Welfare Azra Pechuho also confirmed another death from the novel coronavirus, taking the provincial toll to 11. The patient was 86 years old and a resident of Karachi. He had a history of hypertension and had tested positive on Wednesday.

She confirmed that nine more people have recovered from the coronavirus in Sindh. She added that two of the recovered people are pilgrims from Taftan who were staying at the isolation facility in Sukkur while seven are residents of Karachi. This brings the total number of recovered people in the province to 65.

The province recorded 20 new cases of the novel coronavirus, Meeran Yousuf, media coordinator to the Sindh health minister, said. About 12 cases emerged in Karachi, while eight were detected among pilgrims who arrived in Sukkur on March 31.

Health authorities in Punjab confirmed another 69 coronavirus cases in the province. The provincial tally is now at 914, confirmed Health Department Spokesperson Qaisaer Asif.

Seven new cases of novel coronavirus have emerged in Swat, Deputy Commissioner Saqib Raza Aslam told media in an emergency briefing. All of the cases are locally transmitted, he said, terming the development as ‘worrisome’. He further said that all seven of the patients are from the same family. The number of cases in Swat is now 12.

Some 37 new coronavirus cases were confirmed in Khyber Pakhtunkhwa, taking the provincial tally to 311. The KP health department also reported the death of a patient in Buner district. In a tweet, the department said it made some revisions in previous data about the infections and the total now stands at 311. Nine people have so far died in KP while 30 have recovered from the virus.

The Khyber Pakhtunkhwa government has issued a notification directing that all Tableeghi Marakiz across the province be put under quarantine. The notification also states that at least two samples from each Tableeghi Markaz should be sent for Covid-19 tests.

Khyber-Pakhtunkhwa Health Minister Taimur Khan Jhagra said 121 Taftan-returned pilgrims will be released after completing quarantine and testing negative for the virus. He said out of the 121 pilgrims, 13 were from other provinces – Punjab, Sindh and Islamabad. “We did not abandon these people just because they were mistakenly transported here,” he said, adding that keeping pilgrims from Islamabad, Rawalpindi, Karachi, Gujranwala, Gujrat, Jhang and Mandi Bahauddin quarantined in Peshawar is ‘the right thing to do’ to curb the spread of the virus.

Sindh Information Minister Syed Nasir Hussain Shah said there will be a complete ban on all public movement and activities in Sindh from 12pm to 3pm on Fridays. A notification to this effect was issued by the home department on Thursday evening. The movement and activities will resume between 3:30pm to 6:30pm, he said. He added, however, that the normal lockdown timings will continue for all other days of the week.

Meanwhile, a large number of people gathered on Karachi’s Mauripur Road to protest over not getting rations amid a provincial lockdown. According to police, ration was being distributed among 200-250 residents of Machar Colony when people from surrounding areas also gathered to collect rations. The crowd swelled to some 500-600 people upon which distribution was halted. This angered the people who started protesting and pelting stones at vehicles moving on the road, demanding rations and opening of fisheries so that the protesters (mostly fishermen) could earn their livelihood, police said. However, the protesters dispersed after assurances from local officials that their concerns would be forwarded to the relevant authorities for resolution.